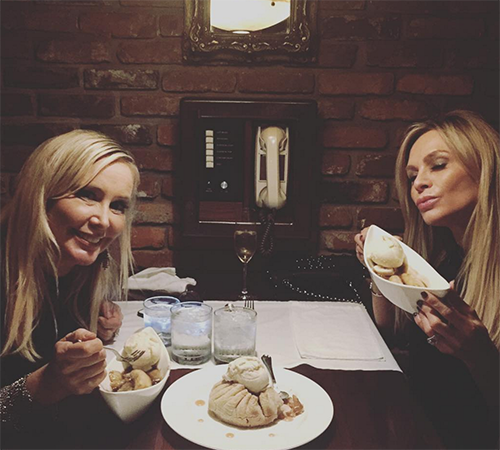 ‘The Real Housewives of Orange County’ season 11 has almost as much drama off-camera than on-camera. Kelly Dodd has engaged in Twitter feuds with both Tamra Judge and Shannon Beador and things have gotten out of control. It seems Bravo is furious with all the cast members and may have ordered the ladies to top attacking each other via social media.

Radar Online exclusively acquired a copy of a letter sent out by Bravo producers to Tamra, Kelly and Shannon, as well as Vicki Gunvalson, Meghan Edmonds, and Heather Dubrow. The Twitter feud started with Tamra and Kelly after someone exposed Kelly’s past in a blog post. Allegedly, the claims include that Kelly cheated on her husband, Michael, and that Kelly had spent time in jail. Kelly wasn’t done yet. On the same night, September 22, Shannon and Kelly went at it on Twitter also.

Bravo reportedly is fed up with ‘The Real Housewives of Orange County’ season 11 cast acting like teenage girls. Radar Online revealed some of the contents of the letter. “The social media viciousness has gone too far and you need to cool it. Specifically, we’re asking you to stop attacking each other. The network is upset and so are we in production.”

Vicki, Tamra, Heather, Shannon, Kelly, and Meghan haven’t been banned completely from social media. They just need to stop trashing each other. Bravo is perfectly fine with the ladies talking about their families, what’s going on outside of ‘RHOC’, what new products they’re shilling, etc.

“Please stop aggressively hitting each other below the belt,” production asks in the letter sent to the season 11 cast of ‘The Reals Housewives of Orange County.’

As of September 29, the ladies are obeying Bravo’s orders. There are a few tweets from Vicki Gunvalson, Kelly Dodd, Heather Dubrow, Tamra Judge, Shannon Beador, and Meghan Edmonds. All the tweets are related to work outside of ‘RHOC’ and, of course, about their children and grandchildren.

How long will this truce last? What will Bravo do if Kelly, Shannon, and Tamra start attacking each other on Twitter again? Bravo most likely won’t want to lose Tamra. She’s been around since season 2. But it’s possible Kelly and Shannon could be cut from the cast of ‘The Real Housewives of Orange County’ season 12.

Leave your thoughts in the comments section below and keep checking CDL for all your celeb news and updates.

“Currently playing Level 2000 on Candy Crush Saga! Use the link in my bio to come play with me! Comment your highest scores! #AD #CandyCrush2000”