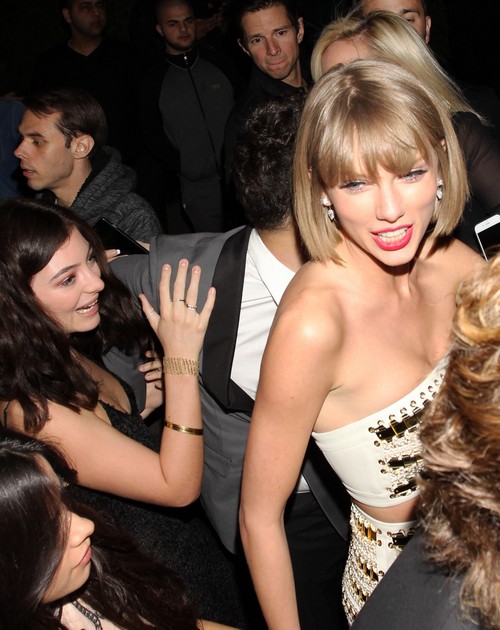 Taylor Swift took the stage at the 2016 Grammy Awards to accept her award for Album Of The Year – and throw some shade at her nemesis Kanye West. Ironically at the last major music awards, the VMA’s – Kanye and Taylor publicly buried the hatchet after years of bad blood since Kanye ruined her 2009 Grammy acceptance speech. But, it looks like the peace was short-lived.

Last week Kanye West released his new song “Famous” – and he created an uproar when he rapped about his new BFF Taylor Swift and mentioned he “might have sex with her,” and then stated “I made that bitch famous.” Taylor was obviously appalled by Yeezy’s lyrics – as were her millions of diehard fans, and all of her famous BFF’s like Selena Gomez and Gigi Hadid.

As if Kanye West hadn’t received enough heat for his “Famous” lyrics about T-Swift, she made use of her Grammy speech to fire shots Kanye’s way, and make Yeezy look like even a bigger fool than he already has made himself look. Although Taylor never actually said Kanye’s name – there wasn’t a soul at the Awards show who didn’t know that it was directed towards him.

Taylor took the stage with this prepared speech, “I want to say to all the young women out there: There are going to be people along the way who will try to undercut your success or take credit for your accomplishments or your fame.

But if you just focus on the work and you don’t let those people sidetrack you, someday when you get where you’re going, you’ll look around and you will know that it was you and the people who love you who put you there. And that will be the greatest feeling in the world. Thank you for this moment.”

If Kanye West takes any more losses this week – he and Kim Kardashian are just going to have to seek shelter until this blows over. Do you guys think Taylor handled that like a pro? Or do you agree with Kanye, did he actually make her more famous because of his infamous 2009 Grammy Awards blunder? Let us know what you think in the comments below!