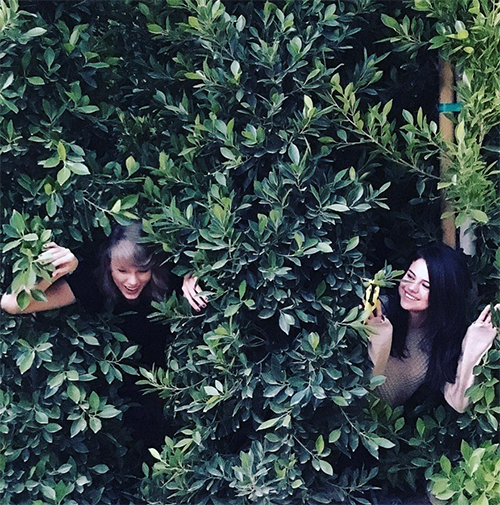 All is well in the world now that Taylor Swift and Selena Gomez are back on track in their cozy friendship. Let’s not let catfights with other celebs ever get in the way of your friendship again ladies, okay?

Selena Gomez and Taylor Swift are the masters of being adorable, especially when they are together. The best-friends-again duo posed for some cute pictures and both shared them on their Instagram accounts.

Gomez captioned hers with, “Are we in the clear yet?” while Swift’s was similar with, “Are we out of the woods yet?” The goofy girls were poking their heads out of some huge bushes, cracking up, and being total girls.

This, of course, comes with double meaning. It’s a reference to Taylor Swift’s single “Out of the Woods.” And then, of course, it’s also suggesting that the ladies are coming out of the woods as friends (once again).

What on earth is really going on with Katy Perry and Taylor Swift anyhow? When will the truth come out? It always does! But really. Taylor Swift wrote “Bad Blood” and we believed that it was directly written about Katy Perry. But then Swift told GQ in the October 2015 issue,

“I never said anything that would point a finger in the specific direction of one specific person, and I can sleep at night knowing that. I knew the song would be assigned to a person, and the easiest mark was someone who I didn’t want to be labeled with this song. I don’t necessarily care who people think it’s about. I just needed to divert them away from the easiest target. Listen to the song. It doesn’t point to any one person or any one situation.”

So either Taylor Swift really did write Bad Blood about Katy Perry and she wants to keep that fact a mystery, or she really wrote a broad statement over any and all lost relationships with ex people in her life.

What do you guys think? Will Katy Perry ever offer an olive branch to Taylor Swift? Can you see Selena Gomez, Taylor Swift, and Katy Perry on a girls night out someday? Could off in the comments below!