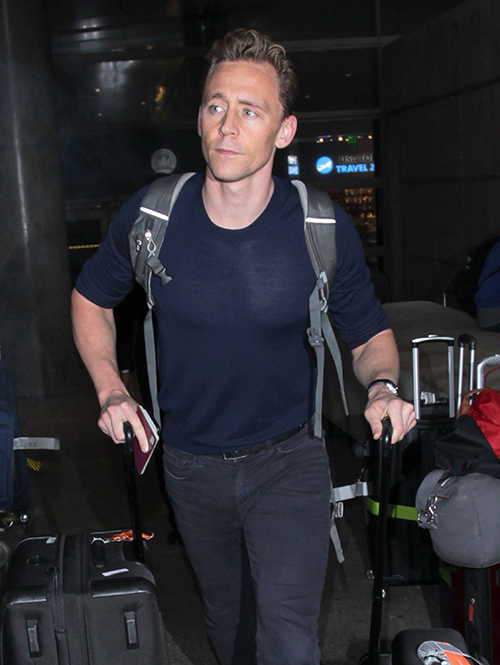 Apparently, Tom Hiddleston is aware that he has become the butt of all jokes and that’s why he’s willing to pull the plug on his Taylor Swift relationship so he can save his own career and his reputation in the process, too.

According to the Daily Mirror, a source close to the situation dished, “Tom can’t deal with being a laughing stock and has told Taylor he’s done unless there’s a 360-degree change on her part. It’s become a total charade and Tom is sick of being treated like a glorified escort.”

Of course, it all began when Tom Hiddleston voluntarily wore a “I Heart T.S.” t-shirt during their well-publicized Fourth of July celebrations earlier this summer. Tom Hiddleston knew that he would be photographed wearing the t-shirt and that the photos would be on the cover of every tabloid magazine and blog, but he was so enthralled in Taylor Swift’s world of power and squads that he didn’t even think twice about the mistake he made.

No self-respecting Hollywood actor Tom Hiddleston’s age is going to make a mockery of himself for the sake of Taylor Swift’s self-obsessed image, but unfortunately, that’s exactly what he did. Tom Hiddleston’s mistake might be irreparable at this point, and that’s probably why he’s willing to go forward with a Taylor Swift break up before he ends up losing even more of his dignity the longer he’s with the singer.

If that weren’t enough, there are also reports floating around that Taylor Swift is in crisis mode: she simply can’t bare the thought of another summer breakup, especially after her Calvin Harris debacle a few months ago. Tell us CDL readers, do you think Tom Hiddleston and Taylor Swift are going to break up? Is Taylor Swift really treating Tom Hiddleston like a ‘glorified escort?’ Let us know what you think.

I LOVE YOU KARLIE! You’re such an exquisite person, always trying to make things better for others. Every day I’m inspired by how giving, loving, and thoughtful you are. Happy 24th Birthday!!! @karliekloss