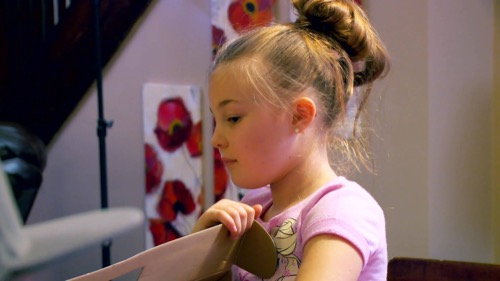 Tonight on MTV their series Teen Mom OG continues with an all new Monday February 8, season 2 episode 7 called “Forgive & Forget” and we have your weekly recap below. On tonight’s episode, after returning from her business trip, Farrah Abraham shares a life-changing decision with her parents.

On the last episode, before leaving on a month-long business trip, Farrah has a last-minute change of heart on who should watch Sophia; Maci and Ryan celebrated Bentley’s birthday; Catelynn had post-wedding depression. Did you watch the last episode? If you missed it, we have a full and detailed recap right here for you.

On tonight’s episode as per the MTV synopsis, “after returning from her business trip, Farrah shares a life-changing decision with her parents; Maci and Ryan celebrate Halloween as a family; and Catelynn and Tyler go to Hawaii for their honeymoon.”

On this weeks episode of Teen Mom OG Debra, Michael and Sophia call Farrah while she is in the UK. Farrah checks in to see that they are taking care of Sophia. She asks if they have everything Sophia will need for school and Debra tells her that they loaded everything in the trunk the night before.

Catelynn and Tyler are getting ready to leave for their honeymoon in Hawaii. Catelynn worries about leaving Nova for a prolonged period of time, but they are happy to be able to spend seven days with just each other. Catelynn goes to the Dr. to make sure that she has enough meds for the trip. She is worried that she will be on the meds for the rest of her life, but Tyler assures her that she won’t be. She tells him that there will be no talk of anxiety attacks on their trip because “it is just an excuse and if they talk about it then it could lead to her having one.”

Bentley is spending Halloween with Ryan and he and Maci are taking him trick or treating as a family. Bentley and Ryan are carving the pumpkin for Halloween.

Amber is struggling to deal with the information that Gary presented to her. She worries that Matt will be viewed as a villain on TV. She tells the producers that Gary is just being mean and that she feels that Gary is using the cameras to help with the custody battle. Matt tells the producers that “he has been dealing with this for 25 years and that he has made mistakes in his past, but he has put them behind him.” He also tells them that while he was a bad person in the past Gary is a bad person now who is trying to use his past to hurt Amber and Leah.

Maci and Taylor take all of the kids trick or Treating. Later they drop Bentley off at Ryan’s parents house and Maci wonders where Ryan is since he missed out on taking him trick or treating. She and Taylor wonder if Ryan has another life somewhere.

Amber is frustrated because she can’t see Leah on her birthday. Amber decides when they get to Gary’s house she wants to go inside and see Leah open her presents, but Matt is dead set against it.

Tyler and Catelynn take Nova trick or treating before they get ready to leave for their honeymoon. Catelynn is sad to leave her baby for an extended period of time

Debra picks Sophia up from school and Farrah makes the decision to move to LA so that she can be closer to more jobs. When she tells Sophia she asks if she “can go to the beach.” Debra and Michael are decorating the house for Farrah’s homecoming and taking pictures with Sophia when Farrah arrives home. Sophia is ecstatic to see her mother and Farrah tells her how much she missed her. Sophia shows Farrah the decorations that they put up to welcome her home.

When Catelynn and Tyler land in Hawaii they decide to FaceTime Nova because they miss her. Catelynn shows off their backyard and the dolphins.

Amber and Matt head to Gary’s to give her the birthday presents but Matt is not happy. Leah is excited and happy to see her mom and she opens the presents they brought. Matt compliments Gary on how nice the kitchen looks and they leave. Amber thinks that they won’t allow Leah to watch the DVD they brought her even though Gary said she could watch it after school. Amber is even sadder when she receives a text from Gary’s girlfriend Kristina saying that Leah loves and misses her. She cries because she wanted to be able to give Leah a real birthday party and take her home with them. Matt tries to comfort her.

Catelynn is finally able to relax in Hawaii. She and Tyler talk about her therapy appointment. She tells him that they talked about her anxiety and Nova and how sometimes she just needs a break. Tyler tells Catelynn that “she never has to tell him anything again.” He tells her that he feels that it is his duty to “Step aside and let her have her mommy moments. They also talk about Carly and how if it weren’t for her they may not be married.

Farrah, Sophia and her parents go out to lunch and talk about her trip to London. After talking about a situation at school Farrah tells them that she is moving to LA. Her parents have different reactions. Michael is sad because she is leaving, but Debra is happy because they will be closer to her.

Maci and Taylor are discussing Ryan over lunch and Taylor asks if it impacts Bentley. Maci says that Bentley doesn’t know what it’s like to have Ryan show up on time and be there. She also says that she doesn’t care, but Taylor thinks it will affect him when he gets older.

Amber and Matt hire a limo to pick up Leah when Gary agrees to let Amber spend some time with her on the weekend. Leah takes her magic kit and performs for her family at the surprise party that Amber has set up to celebrate Leah’s 7th birthday.