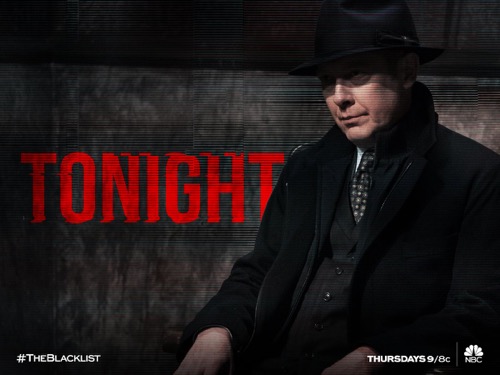 Tonight on NBC their criminal drama, The Blacklist starring James Spader continues with an all new Thursday April 21, season 3 episode 19 called, “Cape May.” On tonight’s episode, an enigmatic beauty goes on the run from unknown attackers.  After the tragic death of Elizabeth on last week’s episode, here is what we know about the death.

On the last episode a team member fell into grave danger due to a tragedy, leading the task force to rely on Red and his unorthodox methods. If you missed it, we have a full and detailed recap right here for you.

On tonight’s episode as per the NBC’s synopsis, “a mysterious beauty on the run from unknown assailants accidentally crosses paths with Reddington (James Spader) and enlists his help to fight back against her attackers.”

Tonight’s episode of The Blacklist kicks off with Red in a dark room, he has Nik (the doctor that operated on Liz) and appears to be holding him hostage. Nik explains in detail that he did everything that he could to keep Liz alive as long as he did, it was out of his hands. Nik tells gun wielding Red that he doesn’t want to die – Red scoffs that everyone dies some day.

A few days later a woman wakes Red up in what appears to be the basement of a shady Chinese business – Red is disoriented and out of it. She kicks him out and tells him that it is Friday and he has been there too long. Red stumbles out in to the street and hails a cab – he instructs the driver to take him to Cape May, New Jersey.

On the 200 mile ride, Red has a lot of time to think. He has flashbacks of Liz’s death, and Baby Agnes. When they arrive in Cape May, Red takes out stacks of hundreds of buys the cab from the driver for several thousand dollars. Then he heads to a local Cape May diner. While he is sitting there, he notices a woman hiding from a man outside, although there is a slight chance that it could all be in his imagination.

Afterwards, Red heads down to the beach to sit be the ocean, and he sees the same woman again. The mysterious woman wanders in to the ocean and Red chases after to save her – once he hits the water and begins swimming out he finds her and drags her back to land. Red drags the woman in to an abandoned beach house nearby. He rummages through the house looking for a blanket to cover the woman up with. In the waiting room there is a woman dressed in a 1960’s style dress.

Red ignores the random woman in the house with them and rushes back to help the drowning victim he just saved from the ocean. It’s becoming increasingly difficult to tell what is figments of Red’s imagination and what is not. He lays down with the shivering woman and she whispers, “It’s not that he died. Or the way that he died. It’s the things that I said to him right before he died.”

Red falls asleep in front of the fireplace with the woman he “saved.” He wakes up a few hours later and it is dark outside, the woman is gone, and the house appears empty. Red can hear footsteps upstairs – he finds the woman in a room staring out the window. She tells Red that there is a man outside, he has come to kill her. Red tells her to stay away from the window – he heads outside to investigate, with a hatchet.

Red returns a few minutes later with a tattered old umbrella, he tells her that was what she outside in the storm and that there isn’t anyone out there. Red’s new friend is relieved, she heads to the kitchen to make them some dinner. While they eat rice and canned mushrooms for dinner – Red asks the woman questions about herself, but she is elusive and won’t tell her anything about herself.

Instead, she asks Red what has brought him here. He stares off in to space and says that it “was a Hobson Choice. There was a woman and her child, both doomed, he could only save one of them. And, he chose the child.” Red goes on to say that he thought if he nourished and taught the child – she would be safe and happy, but all he brought her was misery an eventually death.

While Red and the mystery woman are talking in riddles to each other over dinner, there is a knock at the door. It’s a police officer, he’s an older guy named Duncan. He explains that the neighbors saw lights and thought that they were trespassing. Red gives Officer Duncan a fake ID and says that he is friends with the owners and they lent them the house.

After the officer leaves, Red keeps his new friend company while she takes a bath – they hear a window being smashed downstairs and Red springs to action. It’s the man that was chasing her in the diner at the beginning of the episode, before she tried to drown herself. Red grabs a club and searches the house for the intruder. Red and the woman catch the intruder, she kills him by bashing his head off the bathroom sink. After he is dead she announces that he is “Not the first and not the last, and implies that more men will be coming to try and kill her.

After the house is safe again, Red and the woman head downstairs to sit by the fire. Red gets emotional talking about Baby Agnes. He says that Tom Keen wouldn’t let him ear the baby, or even hold her, and told him that he would never see Liz’s baby. Red couldn’t do anything to Tom, because Liz is dead and he is all that Agnes has left.

The woman’s cell phone rings – she answers it and snaps it in half, she tells Red that he has to leave, the others are coming for them any moment. He loads the body of the man the killed in the car – but the woman tells Red that she is not going with him. She is staying at the house and waiting for the men to come to kill her. Red tells her that suicide is selfish, she sobs that she has a child and she is being raised by someone else. And as long as she is alive, her child’s life is in danger. Sounds an awful lot like Red’s relationship with Liz.

Red refuses to leave and they begin preparing for battle and finding anything they can use for weapons in the house. A car arrives outside, Red says “but I don’t know your name.” The woman scoffs, “Don’t be ridiculous Raymond.” Apparently, she knows his name…

Outside at least a dozen men have the house surrounded with guns. Inside, Red and his new friend have booby trapped the house so whenever any of the guys go I to the kitchen, they are electrocuted. Red waits at the top of the stairs, and systematically takes out any guy that walks up stairs by strangling him with a rope. Meanwhile, the woman that is working with Red has set up a bomb in the other room with a propane tank, which takes out another one of the attackers.

Red and his partner manage to kill every single one of the guys attacking them on the Cape May beach. Red tells her to get the car, they have to clear out ASAP. Red heads to the garage to check on her – but he is confused because the dead body they put in the car last night is gone. He rushes back inside the house and looks around, everything is in prestine condition and all of the dead bodies are gone.

The woman that he was helping is gone too. It looks like it was all in his head after all. Red looks out the window and sees her wandering in to the ocean again, he rushes out there to save her (again), but the woman is gone.

Red spots an old man on the beach – he tells Red that the only living soul he has seen on the beach in over two weeks was him. The man is using a metal detector to dig up things in the sand. He pulls up a buried necklace, covered in sand, Red gives him a couple hundred dollars for it and then runs down to the water and washes off the necklace. There is an inscription, it reads, “To Katarina Love Papa.” The woman appears again, she tells Red, “You had no choice, it was me or Masha.”

The beach bum interrupts Red’s vision to make sure he is okay. Red excuses himself and says there is someone that he needs to see, he rushes off the beach.