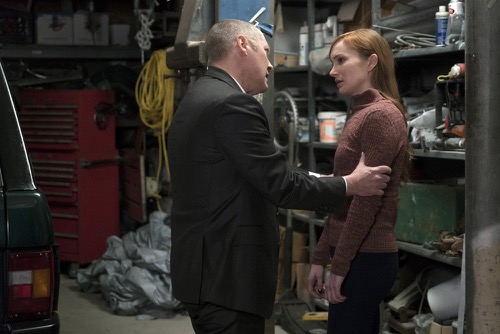 The Blacklist Season 4 fans are excited to learn they will see Liz Keen’s mother Katarina Rostova who will be played by Lotte Verbeek. The Blacklist Season 4 spoilers tease that when the show returns to NBC this Fall 2016, fans of the drama are in for quite a treat!  Not only will we have Elizabeth Keen (Megan Boone) dealing with her father Kirk Alexander, plus Raymond Reddington (James Spader) hell-bent on getting Liz and baby Agnes back, but according to new spoilers, Liz’s Mom will be back too!

In recent seasons of The Blacklist we learned that Liz’s mother Katarina Rostova was a former Russian spy, according to Red, Liz’s mother is dead – but let’s be honest, he’s not the most credible source these days. The relationship between Reddington and Katarina was always a mystery until the final episodes of Season 3, when Red spent a hazy weekend in Cape May with Katarina’s ghost (Lotte Verbeek).

According to new Blacklist spoilers from Entertainment Weekly, Lotte Verbeek is set to return again in Season 4 as Katarina. The showrunner dished to EW, “In the first two seasons, we used pictures and a few fragments of memory, but Lotte brought Katarina to life in ‘Cape May.’ The fan response to that character has been great. The episode itself was a departure, but we’ve found some really interesting story opportunities as a result.”

We’re pretty intrigued as to how they are going to give a ghost an ongoing storyline. Is it possible that Katarina Rostova is still alive, and Liz’s suspicions (or wishful thinking) were accurate? Or are they going to use her to show some flashbacks when Kirk Alexander explains to Elizabeth how he is still alive, or if he really is her father. Regardless of what The Blacklist producers and writers have planned for Lotte Verbeek, we can’t wait to see how it all unfolds!

The Blacklist Season 4 spoilers tease that the premiere air date will be on September 22, 2016. Set your DVR’s! And, let us know what you think Katarina Rostova will be up to in Season 4 in the comments below. As always, don’t forget to check CDL for all The Blacklist 2016 spoilers and news!