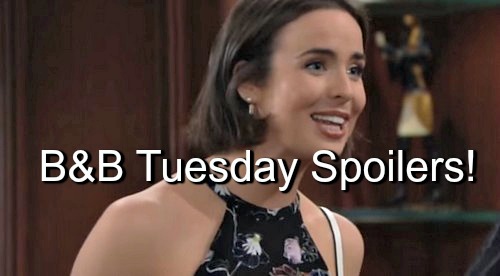 “The Bold and the Beautiful” spoilers for tomorrow’s episode, Tuesday, March 15, tease that Bill (Don Diamont) will give Wyatt (Darin Brooks) instructions on how he needs to operate at Spencer Publications.

Now that Wyatt is taking over Liam’s (Scott Clifton) job, Bill will want to be sure his second-rate son knows what he’s getting himself into. Bill has never been super supportive of Wyatt, but he’s trying to give him a shot.

Wyatt will insist that he’s up to the challenge. In fact, Wyatt will say Bill’s going to wonder why he ever ran his company without him. Meanwhile, Quinn (Rena Sofer) will get a little emotional about what she plans to do.

B&B viewers can tell that Quinn has developed feelings for Liam. Nevertheless, Quinn puts Wyatt’s happiness above her own.

As a result, Quinn may have to give up her latest romance. She feels like murdering Liam is the only way Wyatt will get the life he’s dreaming of. When Quinn seems upset, Liam will take notice. “The Bold and the Beautiful” spoilers say Liam will want Quinn to understand that he’s never going to leave her.

Quinn will envision her murderous plot and point out that all good things must come to an end.

At Forrester Creations, Ivy (Ashleigh Brewer) will stop by for a visit. Ivy recently moved back to Australia, but she’s coming to Los Angeles for a vacation with her father. “The Bold and the Beautiful” spoilers indicate that Steffy (Jacqueline MacInnes Wood) will immediately pummel Ivy with questions about Liam.

Ivy will be surprised by Steffy’s assumptions as well as her engagement news. However, Steffy is the one who will get a real shock. Ivy will inform Steffy that Liam hasn’t been in Australia. She’ll add that Liam didn’t even mean to come there in the first place.

When Ivy elaborates on the plane mishap, Steffy will be stunned. She’ll be more confused than ever about what Liam is up to. Fortunately, Steffy will put her thinking cap on and form some new theories on Liam’s whereabouts. Stay tuned to the CBS soap for updates on this strange situation.

So B&B fans, what do you think about Wyatt’s efforts to prove himself to Bill? Will Liam remain oblivious to Quinn’s deadly plans? Will Ivy help Steffy figure out what’s going on with Liam?