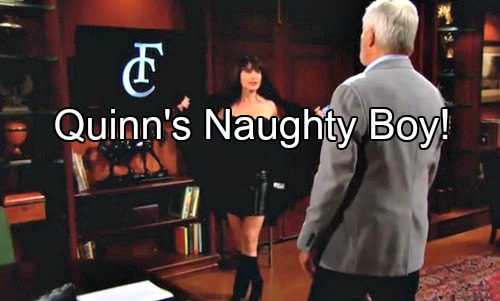 The Bold and the Beautiful (B&B) spoilers for the week of July 11-15 tease that we’re in for some gripping drama. Katie (Heather Tom) will struggle to comprehend why Bill (Don Diamont) would destroy the life they built together. She’ll unleash all of her anger and point out just how much pain Bill has caused.

B&B’s weekly preview video shows Katie saying, “How could you burn our family to the ground?” Katie’s world has been shattered thanks to the affair news. Liam (Scott Clifton) knew Katie needed to hear the truth, but the revelation will come with consequences.

Katie is overwhelmed and her grief will quickly lead her back to the bottle.

As Katie drinks and rages, Bill will sneak Will (Zane Achor) out of the house. He’ll believe he’s doing what’s best for their son, but Katie won’t see it that way. The Bold and the Beautiful spoilers say Katie will freak out when she realizes Will is gone. She’ll undoubtedly think Bill is just twisting the knife.

This whole ordeal is almost more than Katie can handle. While Katie heads toward a breakdown, Ridge (Thorsten Kaye) will be on the verge of losing his job. At Forrester Creations, Ridge will announce that Douglas isn’t his son. He’ll explain that Thomas (Pierson Fode) is actually the baby’s father.

The Bold and the Beautiful spoilers suggest that Steffy (Jacqueline MacInnes Wood) will be shocked and appalled by Ridge’s cover-up. Rick (Jacob Young) will be equally outraged, but he’ll also feel a sense of satisfaction. He’s been waiting for something to trip Ridge up and it’s finally here.

Rick will declare that Ridge is going down. He’ll plan on making sure Ridge is ousted from his position as CEO of the family company. Rick will think it’s time to claim his rightful place on the Forrester throne. He’ll have some competition though. Steffy and Thomas will find the idea of taking charge very appealing.

Eric (John McCook) will have a heavy heart as he tries to figure out what to do. Luckily, Eric’s special friend can lift him out of his funk. Quinn (Rena Sofer) will stop by the office and reveal a sexy outfit. She’ll waltz in and whisper, “Here I am, naughty boy.”

Love them or hate them, it was smart to pair Quinn and Eric. This B&B couple is unexpected, humorous and downright fun. Eric and Quinn may not have a lengthy, meant-to-be romance. They’re probably just supposed to be a clever plot point. Embrace the wackiness and enjoy it!

Of course, Deacon (Sean Kanan) will still be lurking around. He seems to love Quinn in spite of her baggage (and the fact that she nearly killed him). Quinn will insist that there’s more to her than meets the eye. It appears Quinn is quickly becoming obsessed with her new relationship. That’s pretty much Quinn’s version of love.

Let’s hope Eric stays interested until Quinn decides she’s done. We know how far Quinn will go to keep a man. Stick with CDL for updates on the steamy scenes to come. Chime in with your thoughts in the comments below and check back often for the latest Bold and the Beautiful spoilers, updates and news.