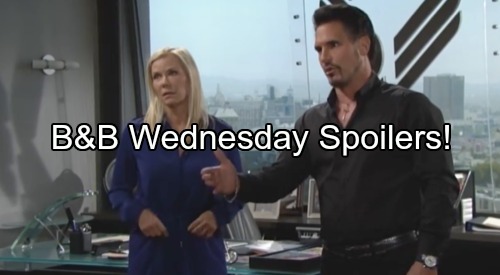 The Bold and the Beautiful (B&B) spoilers for Wednesday, June 29, tease that Bill (Don Diamont) will urge Ridge (Thorsten Kaye) to back off. He’ll insist that Brooke (Katherine Kelly Lang) doesn’t need Ridge to come to her rescue. Ridge will counter that someone has to stand up to Bill.

He’ll think Brooke and Katie (Heather Tom) are both victims of Bill’s selfishness.

B&B spoilers say Ridge will point out that Katie is devoted to Bill for whatever reason. Bill may not deserve it, but Katie is committed to him. Ridge will be outraged that this is how Bill has chosen to repay her. He’ll shout that this ends today.

Bill won’t feel like he owes Ridge an explanation. It’s his love life and he’ll do what he wants.

Brooke will be caught in the middle of this intense confrontation. She’ll try to calm everyone down, but she may not have much luck. Bill and Ridge are incredibly stubborn. They’ve never been on the same page in the past and they’re not about to start now. It sounds like this conflict will heat up in the coming weeks.

Speaking of conflict, we’ll see plenty of it for Wyatt (Darin Brooks) and Steffy (Jacqueline MacInnes Wood). When Quinn (Rena Sofer) drops by the house, Steffy will erupt. She told Quinn to stay away, but her mother-in-law continues to ignore the order.
The Bold and the Beautiful spoilers reveal that Steffy will make her position crystal clear.

She’ll declare that Quinn is forbidden from entering their home. After she throws Quinn out, Steffy will give Wyatt a piece of her mind.

If Wyatt wants to see Quinn, that’s fine. She’s Wyatt’s mother and Steffy knows where he stands. However, Steffy will draw a line when it comes to the location of their meetings. She’ll indicate that Quinn won’t be visiting their house ever again. It seems Steffy is really laying down the law.

The Bold and the Beautiful viewers can expect Quinn to be an issue for this couple as they try to move forward. Wyatt has already softened toward his mom, but Steffy is angrier than ever. Quinn brought Steffy and Wyatt together, but she could ultimately cause their marriage to crumble.

Meanwhile, Rick (Jacob Young) will have a chat with Katie about love and loyalty. He can’t speak for Bill, but he’ll believe Brooke would never betray Katie. Rick will suggest that Brooke wouldn’t be able to live with herself. Katie won’t be so sure about that. Obviously, Rick doesn’t know his mom as well as he thinks he does.

Will Rick ever get a clue about Brooke and Bill’s actions? That probably depends on whether or not they stop. Ridge is certainly pushing for a conclusion to their love affair, but Brooke may have trouble resisting temptation.

Of course, Katie will do her best to keep her husband in line. She definitely has a few tricks up her sleeve. Bill could be blindsided by Katie’s upcoming news. Stick with B&B for updates on Katie’s plan.