‘The Bold and the Beautiful’ Spoilers: Stunned Wyatt Learns Quinn Has Power of Attorney – Ridge, Carter and Steffy in Hot Water 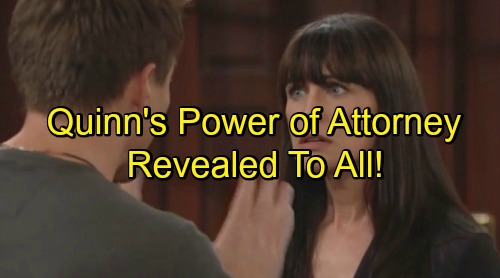 The Bold and the Beautiful (B&B) spoilers tease that Wyatt (Darin Brooks) will have a chance to see Steffy’s (Jacqueline MacInnes Wood) true colors. After Wyatt supports Steffy and urges Quinn (Rena Sofer) to back off, he’ll be in for a shock. A huge secret is about to blow.

B&B fans know that Eric (John McCook) put Quinn’s name on the power of attorney form. He wanted Quinn to be in charge if anything happened to him. That’s understandable considering how Ridge (Thorsten Kaye) has been acting lately.

Ridge couldn’t even show up on his father’s wedding day. Eric knew there was no way Ridge could be trusted to handle his affairs. Obviously, he was right about that. Despite Eric’s wishes, Ridge has found a way around the document.

He’s lying to make sure Quinn has no influence on the company or their family.

As usual, Ridge has roped other people into his bad idea. He should know by now that his schemes are terrible. Ridge tried to keep Thomas (Pierson Fode) from finding out about Douglas’ paternity. Now Ridge isn’t even with Caroline (Linsey Godfrey) anymore.

Ridge’s plan to boycott the wedding resulted in a lengthy tirade and a hospitalized Eric. Once again, Ridge is destined for failure with this cover-up plot. Carter (Lawrence Saint-Victor) will begin to have doubts about keeping this secret.

He’ll insist that he needs to come clean about what Eric really stipulated.

Ridge and Steffy will try to talk Carter out of it, but his mind may be made up. Regardless, they’ve got bigger problems to worry about. The Bold and the Beautiful spoilers say Wyatt will soon be in the loop on what they’ve done. We’ll see a classic case of B&B eavesdropping.

Will Wyatt confront these liars about the issue? Will he report to Quinn immediately or will Steffy attempt to strike a deal? It should be interesting to see where The Bold and the Beautiful is going with this storyline.

Steffy might be able to keep Wyatt quiet by agreeing to move back in with him. However, Wyatt would be torn in that scenario. He doesn’t always do the right thing, but he usually tries to. Wyatt might feel like Quinn deserves updates, especially since it’s what Eric wanted.

On the other hand, Wyatt knows that Quinn can get crazy when she has too much power. He also realizes that his marriage could end for good if Quinn keeps causing drama.

No matter what Wyatt ultimately decides, he’ll at least make an effort to get through to Ridge and Steffy.

Wyatt will suggest that Quinn is on the straight and narrow now. He’ll contend that Quinn can be trusted. Ridge and Steffy will undoubtedly scoff at Wyatt’s point of view. They just won’t believe that Quinn is worthy of their respect.

Will Ridge and Steffy convince Wyatt that Quinn is still a threat? Are they correct or has Quinn truly changed? We’ll keep you posted as more news comes in. Stay tuned and don’t forget to check CDL often for the latest Bold and the Beautiful spoilers, updates and news.

TODAY: Quinn learns the consequences of crossing a Forrester. pic.twitter.com/yO7TkT8RMm