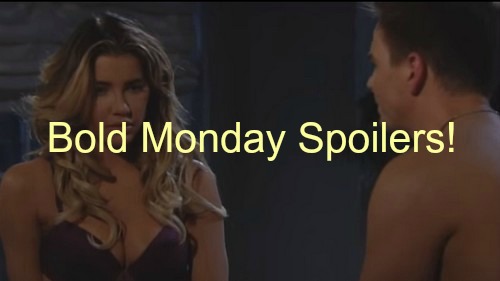 “The Bold and the Beautiful” spoilers for Monday, January 11, tease that Wyatt (Darin Brooks) will try to persuade Steffy (Jacqueline MacInnes Wood) that she’s with the wrong man. Wyatt will suggest that things aren’t going to get any easier with Liam (Scott Clifton).

Steffy will likely always run into problems because of Liam’s need to play the hero.

Wyatt will believe he has a real connection with Steffy and he’ll insist that she can feel it, too. Steffy was undressed for bed when Wyatt came in her room and took his shirt off. Wyatt said they should go swimming, but it looks like they might be poised to take a swim in the sheets instead.

Will Steffy be feeling vulnerable enough to cave in? It’s tough to say, but it’s clear that temptation is lurking. Wyatt certainly wouldn’t mind if someone chose him over his brother for a change.

Meanwhile, Liam will continue his conversation with the passenger next to him on the plane. “The Bold and the Beautiful” spoilers say Liam will plan on going home and convincing Steffy to walk down the aisle as soon as possible. It seems Liam is determined to make this situation right.

Liam will hint that nothing can stop their relationship, but he probably isn’t considering the possibility that Wyatt could swoop in and steal his fiancée. Of course, Steffy may change her tune once she gets updates on the whole story. Liam’s trip to Australia wasn’t his fault and he’ll undoubtedly be apologetic.

However, what will happen if Steffy has already hooked up with Wyatt by then? This could be the start of big trouble if Wyatt and Steffy can’t control their impulses. Liam and Steffy’s romance would take a huge hit. It would mean bad news for Liam’s bond with Wyatt as well.

These brothers have had their fair share of conflict over the years, but this could really rev up their rivalry. B&B viewers will be anxious to see which man Steffy ends up with down the road. Stick with “The Bold and the Beautiful” to see if Steffy finds herself in hot water.

So B&B fans, what do you think about Wyatt’s attempt to woo Steffy? Could passion overcome them in the heat of the moment? Will Liam be able to resolve his issues with Steffy or will they just develop a different set of problems?