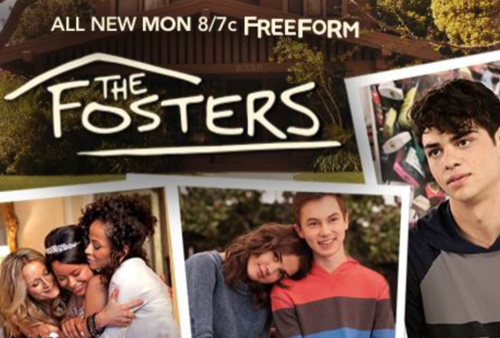 Tonight on Freeform their hit drama The Fosters returns with an all new Monday, August 29, season 4 finale called, “Collateral Damage,” and we have your weekly The Fosters recap below. On tonight’s episode, Callie (Maia Mitchell) and the family set up a Justice for Jack booth at a music festival in hopes of stopping Justine’s foster-care bill.

On the last episode, Brandon traveled to New York for his Juilliard audition, where he met a girl who forced him to take a hard look at his relationship with Cortney. Did you watch the last episode? If you missed it, we have a full and detailed The Fosters recap right here for you.

On tonight’s episode as per the ABC Family Synopsis, “Callie and the family set up a Justice for Jack booth at a music festival in hopes of stopping Justine’s foster-care bill, but Callie’s advocation for both Kyle and Jack puts her in danger. Meanwhile, tensions between AJ and Aaron escalate; and Mariana flees from the festival after seeing Nick, leading the family to frantically search for her.”

We’ll have a The Fosters recap of tonight’s episode at 8pm that airs on Freeform. In the meantime, hit up our comments and tell us how excited you are for the next episode of the fourth season of The Foster.

Callie already had a lot on her plate what with helping her former foster brother Kyle while he’s in prison and working on her own Senior Year Project on top of everything however, she just couldn’t ignore what she had heard about Justine and what was going on with the bill that Justine had been trying to push through. The bill itself had apparently failed on Capitol Hill. So Justine and the company she was working for were trying to make their widely dangerous law, that privatized foster homes, into the norm by putting it up for citizens vote. Much like the way Prop 8 was passed for instance. Yet, Callie knew that she had to stop the bill from going through because of what happened to her friend Jack.

Jack had been placed with a dangerous man who had already been deemed unfit through regular channels with social services. So honestly there was no reason whatsoever to place Jack with such a man like that and it actually didn’t come as a surprise when his new foster father ended up killing him because he said Jack had gotten on his nerves yet Justine and the greedy company she worked for had allowed it to happen because of their bottom. And unfortunately, children stop being children when they become part of someone else’s overall profit. But because no one really knew how dangerous privatizing the foster care system was, Callie decided to alert everyone by proposing her own bill that she wanted to call Jack’s Law.

The theory was that Jack’s Law would inform everyone that Justine’s bill which was The Foster Care Reform Act was going to be doing more harm than good. So all Callie really needed was about half a million signatures to get her bill up for the vote as well. Though Callie being Callie, she tried to going to her family for help. She had asked her family to help her run a Justice4Jack booth at the festival that would be dedicated to Jack and get the word out. And pretty much everyone was board except for Jude. Jude still wasn’t ready to forgive Callie for their falling-out and to make things worse he was also in a horrible mood with everyone since he got grounded.

Stef and Lena had found him smoking pot with his newest friend. So they had naturally grounded him as well as wanted him to keep his distance from Noah for a while. However, Jude still doesn’t see what he did was wrong or that his family didn’t want him going down the wrong path and so now he’s just another moody teenager in the house although his family did at least get him to help put Callie’s booth up for the music festival so Jude and even Callie’s sister Sophia had come out to help. Only Jude later pulled a disappearing act while everyone was out trying to scrounge up the necessary signatures.

Jude had seen Noah at the festival so he had decided to ignore what he was doing and go off with his new boyfriend. Although, as it turns out Jude wasn’t the only one to wander off at the festival because eventually Mariana also felt like she needed to get away from everyone else. Mariana had been spiraling out of control since the thing with Nick and her reliance on her brother’s ADHD medication was now out of control however everything began crashing down for her after she got a low grade at school. Mariana usually did very well academically so she had been surprised that her grades were slipping. And as she trying to make up the paper, she had found out that Mat had gotten into a school in Boston.

The school was apparently a good one and it was bound to help Mat’s musically career if he went there. So Mariana had tried to be happy for him yet she hadn’t known how to feel about Mat moving so far away and then it had felt like the hits kept coming when her brother had told her about Nick. Jesus had said that he explained everything to Nick. Like how Mariana had been too scared of him to break up with him and that she was with someone else now. So Jesus, it seems had thought that he was doing his sister’s a favor by telling Nick to leave her alone when all that really did was frighten Mariana because Mariana was then worried about what Nick might do now that he knew the truth. And so Mariana had run off during the fair because she needed time.

But her being by herself resulted in there being no one able to later find her once they realized something was wrong. Mariana had unfortunately started to hallucinate while she was alone and so there was no one around to tell her that she wasn’t seeing Nick. Nick was still at his house and he was hooked up to an ankle bracelet. So there hadn’t been a problem with Nick until Jesus created one. Jesus had called Nick demanding to know where he was and if he had seen Mariana. And so that’s how Nick found out Mariana was missing and decided to go see her for himself.

Nick had cut off his ankle bracelet and had gone looking for Mariana. So he eventually found her before anyone else and had tried to calm her down enough in order for her to accept help. Yet, when Jesus finally spotted his sister, he had tried to attack Nick because he thought Nick had tried to hurt her. So Nick and Jesus got into a fight that ended up with Nick taking a nasty blow to his head. Which was what his doctor warned him about after he had shot himself with a nail gun and was deemed prone to seizures. And so there was something wrong with Jesus and we won’t know how he is until the new season kicks off.

And yet Jesus’s life wasn’t the only one dangling in the air. Callie had gotten into a fight with the grandson of the woman that Kyle allegedly killed. So Callie had tried to tell Troy Johnson was innocent and that she was prepared to prove it. However, its looking like she put herself in harms way because Troy might have been the one to kill his grandmother though the other man that Callie had suspected wasn’t exactly harmless. Her other suspect has been spying on her and her family. And he had tried to get whom he thought was Callie alone when it turns out he nearly cornered her lookalike sister in the bathroom.

So tonight’s was a pretty gloomy ending with Jesus injured, Callie possibly kidnapped, and Brandon getting thrown out of Julliard because they had heard about his SATs scam.