“The Walking Dead” spoilers for the season 6 finale have focused heavily on how Negan (Jeffrey Dean Morgan) will meet the group, what he’ll say to Rick Grimes (Andrew Lincoln), and who will be picked for the deadly baseball bat beating we know is coming.

We got to listen to Negan’s monologue as he readies the group for the inevitable sacrifice and how he chooses his victim. While it’s not clear who falls prey to “Lucille” – and we won’t know until the Season 7 Walking Dead premiere – there are some people we can eliminate.

Carl Grimes (Chandler Riggs) is not on the chopping block and it seems like Maggie Greene (Lauren Cohan) will also survive. There are other women in the captive group – likely Sasha (Sonequa Martin-Greene) as well, but the screams of protest as the killing indicate a man is the chosen victim.

Will it be Glenn Rhee (Steven Yeun)? Could it be Abraham Ford (Michael Cudlitz) who died the crossbow bolt death in the graphic novels that Dr. Denise (Merritt Wever) got instead? Or will TWD showrunners sacrifice another Alexandrian like Aaron (Ross Marquand) rather than one of Rick’s core group?

**SPOILER ALERT – THIS IS A SPOILER OF THE LAST 10 MINUTES OF THE FINALE – DON’T READ IF YOU DON’T WANT TO KNOW THE WHOLE UGLY OUTCOME!

Negan: Are we pissing our pants yet? Oh boy, do I have a feeling we’re getting close… Yep. You’re going to be pee-pee pants city here real soon. Which one of your pricks is the leader?

Savior: It’s this one. This is the guy.

Negan: Huh. All right. You’re Rick, right? I’m Negan and I do not appreciate you killing my men. Also, when I sent my people to kill your people for killing my people, you killed more of my people. Not cool. Not cool. You have no idea how not cool that shit is, but I think you’re going to be up to speed shortly.

Yeah. You are so gonna regret crossing me in a few minutes. Yes you are. You see Rick, whatever you do, no matter what, you don’t mess with the new world order and the new world order is this. It’s really very simple so even if you’re stupid, which you very well maybe, you can understand it.

You ready? Here goes, pay attention. Give me your shit or I will kill you. Today was career day. We invested a lot so you will know who I am and what I can do. You work for me now. You have shit – you give it to me – that’s your job.

Now I know that’s a mighty big nasty pill to swallow but swallow it you most certainly will. You ruled the roost, you built something, you thought you were safe. I get it. But the word is out and you are not safe. Not even close.

In fact, you are pegged, more pegged if you don’t do what I want – and what I want is half your shit. And if that’s too much, you can make, find or steal more and it’ll even out sooner or later. This is your way of life now. The more you fight back, the harder it will be.

So if someone knocks on your door (chuckles) you let us in – we own that door. You try to stop us and we will knock it down. You understand? What? No answer? You don’t really think that you were going to get through this without being punished, did you?

I don’t want to kill you people – I just want to make that clear from the get-go. I want you to work for me. You can’t do that if you’re dead, now can you? I’m not growing a garden but you killed my people – a whole damn lot of them. More than I’m comfortable with.

And for that, for that you’re going to pay. So now, I’m going to beat the holy hell out of one of you. This, this is Lucille [Negan’s bat] and she is awesome. All this is just so we can pick out which one of you gets the honor.

Negan to Carl: Huh. I’ve got to say this shit – you got one of our guns. Oh yeah. You got a lot of our guns. Shit kid. Lighten up. At least cry a little. (Negan chuckles)

Negan to Maggie: Jesus you look shitty. Let’s just put you out of your misery right now.

Glenn: (Screaming) No don’t. (Maggie screams – Glenn dragged away from her)

Negan: Nope. Get him back in line.

Negan: All right listen, don’t any of you do that again. I will shut that shit down no exceptions. First one’s free – it’s an emotional moment – I get it.

Negan to Rick: Sucks, don’t it – the moment you realize you don’t know shit? This is your kid, right? (Negan chuckles) This is definitely your kid (indicates Carl).

Negan: Do not make me kill the little future serial killer. DO not make it easy on me. I got to pick somebody. Everybody’s at the table waiting for me to order.

(Negan whistles as he paces)

Negan: I simply cannot decide. (chuckles) I got an idea. (chuckles) Eeny, meeny, miny, moe. Catch a tiger by his toe. If he hollers, let him go. My mother told me to pick the very best one and you – are – it.

Negan: Anybody moves, anybody says anything, cut the boy’s other eye out and feed it to his father and then we’ll start again. You can breathe, you can blink, you can cry. Hell you’re all going to be doing that.

Negan: Oh look at that – taking it like a champ.

(Another smash with the bat – very wet sounding – more screams – a third strike, wetter than the last – several more while other screams then silence) 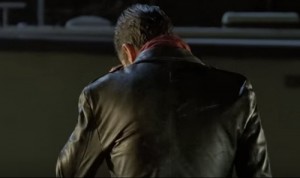 What do you think, TWD fans? Who meets their doom at the end of Negan’s bat Lucille? Share your comments below and be sure to come back to CDL for our live recap of the 90 minute Season 6 finale of the “The Walking Dead.”