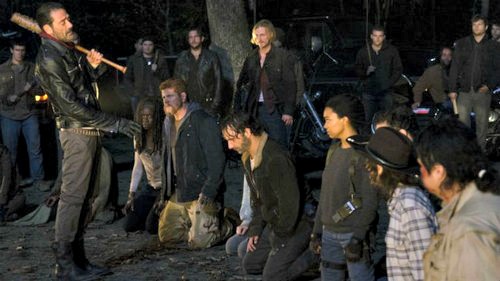 “The Walking Dead” Season 7 spoilers fans have been rabidly wondering who Negan (Jeffrey Dean Morgan) killed with his terrifying bat Lucille since the Season 6 finale. TWD showrunners claimed they took a “hard left” from the books, so many believed Glenn (Steven Yeun) would NOT die, but new spoilers indicate otherwise.

Chris Hardwick, host of “The Walking Dead” after show “Talking Dead,” revealed that he believes that Negan killed Glenn as he did in the books. Hardwick posted a video of his speculation saying, “I can’t help but think it’s Glenn. I don’t know how it could be anyone else…”

The Walking Dead fans who read the graphic novels assumed Glenn would fall to Negan’s bat at the end of Season 6. But when Glenn apparently died in the dumpster incident, it seemed a strange and off-kilter death – this could have been the “hard left” alluded to by showrunners.

Of course, we learned Glenn improbably survived the walker horde and eventually got back to Alexandria. This lumps Glenn in with other characters that are on borrowed time like Abraham (Michael Cudlitz) who escaped a death that took Dr Denise (Merritt Wever) instead.

In a way, TWD fans mourned the loss of Glenn already this season with the dumpster fake-out, so perhaps showrunners thought that would take the edge off his brutal death in the climax of Season 6.

There are a number of reasons that Glenn should be the one to die.

#1 Maggie (Lauren Cohan) is suffering a miscarriage (as far as we can tell) since prenatal care in the apocalypse is less than great. Losing the baby and Glenn at once would be catastrophic and a great (if devastating) way to kick off Season 7.

#2 Glenn broke his code of never killing a living human. When the Alexandria gang invaded the Savior compound, he went on a killing rampage that he justified as necessary to save the group. But this tainted Glenn and so his death at Negan’s hands could be karmic.

#3 Glenn stepped out of line – literally – against Negan’s orders during the Saviors vs Alexandria gang confrontation. Negan killing Glenn would make it clear to everyone that they should never step out of line again when he gives them orders.

#4 As the moral compass of the group, the loss of Glenn would derail them. It was Glenn that saved Rick (Andrew Lincoln) in Atlanta and often kept him going. Rick is falling apart now and Glenn dying could finish him mentally. A broken Rick is very interesting heading into Season 7.

#5 Losing Glenn and her baby would give Maggie iron resolve. While Rick is losing it, Maggie could step up since she’d be hardened by Glenn’s death. Maggie already took control of Alexandria in the wake of Deanna’s death and this could mold her into a stronger leader.

#6 If you slow down the audio of the final moments of the Season 6 finale, it sounds like you can hear a man saying “Mag… Maggie” which are Glenn’s last words in the comic. You can also hear what sounds like Maggie screaming “Glenn” but the audio faded in the last moments so it’s not obvious.

#7 The bulk of Negan’s monologue is 100% true to the dialogue in the graphic novels, so that’s another clue. He used the “pee pee pants” line and almost all of the language from the comics so this could indicate that TWD showrunners would stay as close to the books as possible.

#8 Glenn’s death in issue 100 of the comics is a milestone moment that was horrifyingly brutal. Would TWD creators throw away what’s one of the most pivotal moments in the graphic novels just to surprise fans? Nah. They loved that scene and would like to see it play out in real life as written.

#9 The death of Glenn is the death of hope. The Savior takeover of the Alexandrians is a major change that leaves their fate in other hands. Losing Glenn underscores all they’ve lost and would be the most heartbreaking death, so it seems a good starting point for Season 7.

“The Walking Dead” fans may need to get out their hankies and prepare to bid a teary final farewell to Glenn, one of the few characters who survived since Season 1. When “The Walking Dead” Season 7 premieres in October, we’ll know for sure – but for now, Glenn’s death seems likely.

Share your thoughts below and check back with CDL starting this Sunday for live recaps of TWD spinoff “Fear the Walking Dead” and more spoilers for Season of TWD.