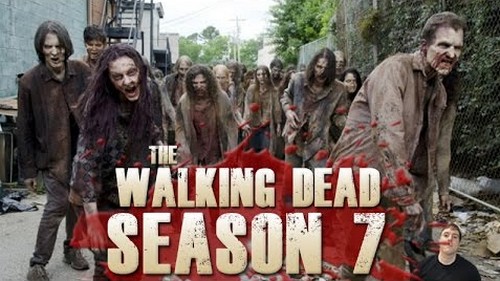 “The Walking Dead” spoilers for Season 7 are already leaking and it looks like we can expect major action, devastating sadness, a change in story direction, and of course the reveal of who Negan (Jeffrey Dean Morgan) beat to death. Here’s what we know so far.

Season 7 of “The Walking Dead” is back in October 2016 on the second Sunday of the month and showrunners promise that they won’t drag out the death reveal – we’ll find out straight away who died. Negan himself, Jeffrey Dean Morgan, tells us what to expect in Season 7, Episode 1.

JDM said, “Season seven picks up right where we left off and you’ll see who was at the end of that bat and what happened from there.” We do have to wonder how much of the brutal bloody gore we’ll see. The images from the graphic novels was stomach turning – a loose eyeball, brains, more. Ick.

In TWD Season 7, we can also expect new characters, a new community and split storylines. While it won’t be as bad as after the group splintered when the prison fell after the Governor and walker attack, we will see separate storylines as Season 7 kicks off from episode one through episode eight.

Morgan (Lenny James) and Carol (Melissa McBride) start the season with The Kingdom community. This is a group of survivors that lives in a feudal type setup with a “King” named Ezekiel. They wear armor, ride horses, and are intent on setting up a new society.

Carol will be nursed back to health with Morgan at her side at The Kingdom compound. Ezekiel is a former zookeeper and, in the graphic novels, has a pet tiger named Shiva. But will the AMC show bring in a tiger or write that interesting detail out?

When asked about Ezekiel and his feline pet, Scott Gimple said, “If I were just watching the show [as opposed to running it], I’d want to see that tiger.” Fingers crossed that we do get to see a zombie-eating big cat alongside the leader of The Kingdom.

TWD co-creator Robert Kirkman said in an interview, “I think we can do a tiger on the show. Game of Thrones has people fighting bears in arenas, so I think we can do some tiger stuff.” No casting news yet on Ezekiel, but he will be an African-American actor in the 40+ age range.

Ezekiel’s group, The Kingdom, will unite with Hilltop and Alexandria to take on The Saviors probably at the mid-season or season finale of Season 7. We’ll also get to see where The Saviors really live – the bunker location that the Alexandrians raided was just an outpost – kind of like a franchise location.

The Saviors live in a compound called The Sanctuary which in the books was a factory they had fortified. Since most locations and sets have been true to the books, that’s likely what we can expect when we finally get to see where Negan hangs his hat.

Also The Walking Dead Season 7, Negan has a very important relationship with one Alexandrian in particular – Carl (Chandler Riggs). We’ll find out more about Negan’s code of ethics – yes, he has one – and learn that he values women and children. Carl and Negan share a twisted and strange evolution.

We’ll learn more about Dwight (Austin Amelio) and how his face ended up scarred. Hint: Negan ironed it! Our first look at trailers for Season 7 will hit late July when “The Walking Dead” panel at San Diego Comic Con shows the first video spoilers for the upcoming season.

While we know the books and show diverge to some extent, Season 6 action confirms many Season 7 spoilers including the big death, Negan, Ezekiel, The Kingdom, resolution on Maggie’s (Lauren Cohan) baby drama, and an inevitable showdown of The Saviors vs the other united communities.

What do you think TWD fans? Are you excited to meet Ezekiel and The Kingdom? Are you ready for Negan to reign supreme as the “big bad” of Season 7? Share your comments below and check back with CDL often for “The Walking Dead” spoilers plus live recaps of companion show “Fear the Walking Dead.”