The Young and the Restless (Y&R) Spoilers: Adam Gets Involved With Sage, Nick Tells Brother to Back Off 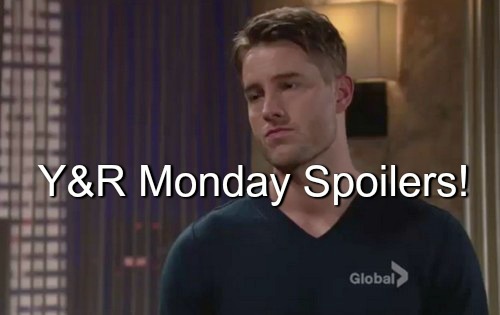 “The Young and the Restless” spoilers for Monday, February 1, will see the brothers Newman go at it while the situation at Fairview begins to unravel. Y&R spoilers also tease that Phyllis (Gina Tognoni) and Billy (Jason Thompson) will get a little nervous about their scheme. While Victor (Eric Braeden) is out of town, Victoria (Amelia Heinle) will be keeping an eye on Natalie (Mara McCaffray).

That means Victoria will also be heavily involved in handling the Internet security deal.

Phyllis will get updates on the fact that Victoria has been put in charge. This is obviously a snag Phyllis wasn’t expecting. Billy will be concerned by the news and he’ll fear that Victoria might start sniffing around. Phyllis and Billy may get busted if Victoria digs too deep. There’s a good chance Phyllis will tell Billy not to panic, but it’s clear that they’re getting in over their heads.

Meanwhile, Sage (Kelly Sullivan) could be getting in over her head as well. Nick (Joshua Morrow) and Sage have teamed up to pull off an elaborate plot. Sage was recently committed as part of their plan to help Nick grow closer to Dr. Anderson (Elizabeth Bogush). 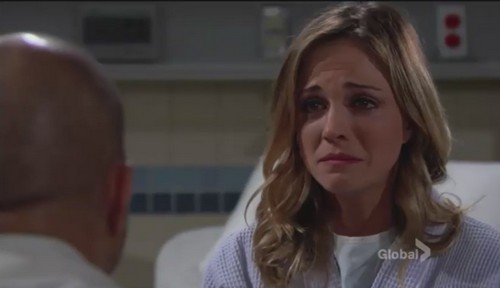 However, not everyone is convinced that Sage is off her rocker. Adam (Justin Hartley) knows Sage doesn’t belong in the psych ward and now Dr. Shelby (Terrell Tilford) is about to get suspicious. “The Young and the Restless” spoilers say Dr. Shelby will press Sage to admit the truth. He’ll urge Sage to tell him what’s really going on.

Next week, Nick and Sage will decide they need to raise the stakes. They’ll try to find a way to get Sage sent to Fairview. That might be a dangerous move. We all know what happened to Sharon (Sharon Case) during her stint. Sage could be drugged and locked up for months if she’s not careful.

In the meantime, Nick will have a chat with Adam. Monday’s Y&R preview video shows Nick strutting into the penthouse and declaring that they need to talk about Sage. Nick will believe they should just get everything out in the open. Nick can sense that Adam has become overprotective of Sage.

Nick might point out that Adam has his own wife to worry about. Perhaps Nick will suggest that Adam should try focusing on Chelsea (Melissa Claire Egan) instead of intruding in someone else’s relationship. Nick thinks he can take care of Sage just fine on his own. Of course, you can bet that Adam won’t back off. Stick with the CBS soap to see if Adam will get tangled up in another mess.