The Young and the Restless Spoilers: Adam’s Absence Brings Chelsea Closer to Nick – Brothers Battle for Chelsea and Christian? 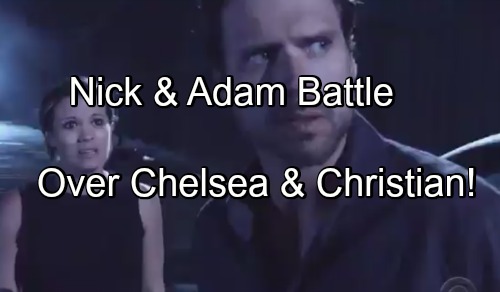 The Young and the Restless (Y&R) spoilers tease that Adam (Justin Hartley) will face some hurdles as he works toward a future with Chelsea (Melissa Claire Egan). Things are never easy for this couple and that trend will definitely continue in the coming weeks. Both Chelsea and Adam will struggle through trying times.

Since Justin Hartley is busying filming NBC’s This Is Us, we’ll see a break for Adam at The Young and the Restless. Fortunately, Y&R will find ways to keep us intrigued. Adam’s love for Chelsea will be tested when unexpected complications arise. That could lead to some shocking storyline developments.

Of course, there’s a chance that Chelsea will eventually believe Adam is dead. Y&R needs Adam out of the picture until a recast is brought in or Hartley can handle more airtime. If they take the presumed death route, it might free Chelsea up to be with another love interest.

Many Young and the Restless viewers suspect that Nick (Joshua Morrow) could be Chelsea’s new leading man. Adam and Nick are on bizarrely good terms right now. Any strife they faced in the past has faded away. There’s undoubtedly a reason these two are playing nice.

The show might be letting some brotherly trust develop so the backstabbing can really sting. Adam asked Nick to look after Chelsea and Connor (Gunner and Ryder Gadbois) when he thought he’d be locked up for a decade. You can bet that Nick will keep that promise if Adam seems to be gone forever.

What might happen next? Would a grieving Chelsea turn to Nick for comfort? Could their bond grow to love? It’s certainly possible. As fertile as women are in Genoa City, we shouldn’t count out a pregnancy for Chelsea. Adam would be furious if he found out Chelsea was carrying his brother’s baby.

We can’t forget about how Christian might fit into this scenario either. The Young and the Restless may be saving the Sully reveal for when Adam is back on canvas in some form. He might need to be around for such a stunning revelation.

On the other hand, letting the truth come out while Adam is gone might offer an interesting twist. Let’s say Adam manages to get off the hook for his crimes somehow. We shouldn’t fret over the details. Pardons and reduced sentences are quite common on soaps.

If Adam returns to Chelsea, he’s going to want her as his wife again. Adam would surely get revenge on Nick for stealing his woman, too. Looking after Chelsea wasn’t supposed to mean sleeping with her. What if Sully has already been revealed as Christian by then? Imagine the fallout if Nick has custody.

Adam could strut in and announce that he wants his son. He could crush Nick by exposing the secret, reuniting with Chelsea and taking back Christian. That sounds like real vengeance!

Regardless of how this plays out, we’re all looking forward to seeing what the future holds for Christian and his complex family. We’ll give you updates as more news emerges. Stay tuned and don’t forget to check CDL often for the latest Young and the Restless spoilers, updates and news.

On Thursday, Sept. 1st, Don’t miss me on The Young and the Restless! #YR11K pic.twitter.com/Gfw97uiOFn