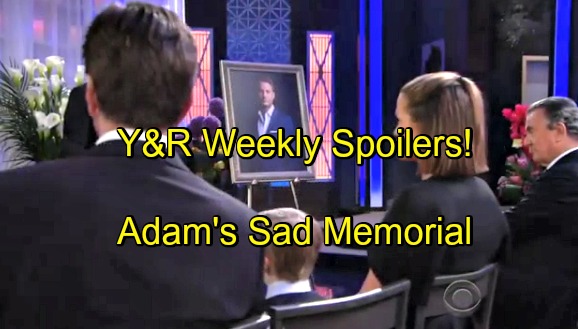 The Young and the Restless (Y&R) spoilers for the week of September 5-9 tease that some somber episodes are ahead. Adam’s (Justin Hartley) death will truly devastate his loved ones. Likewise, Y&R fans are crushed over the departure of Justin Hartley. It’s going to be a sad week all around!

Nevertheless, life must go on and the Newmans will try to pick up the pieces. The Young and the Restless spoilers say Victor (Eric Braeden) will be particularly affected by the loss. He knows that he’s the one who led to this shocking chain of events. If Victor hadn’t framed Adam for Constance’s (Kelly Sullivan) murder, none of this would’ve happened.

Of course, Victor claims he never intended on letting Adam go to prison. He always planned to back Adam into a corner and reveal the exonerating evidence at the last minute. However, Victor should’ve known better than to partner with someone as crazy as Chloe (Elizabeth Hendrickson). She obviously couldn’t be trusted.

Now Victor is paying a steep price for his mistake. The Young and the Restless weekly promo shows Victor pulling Victoria (Amelia Heinle) close. As they embrace, Victor will get a bit weepy. He’ll suggest that sometimes he wonders about the decisions he makes in life.

Victor is finally taking a little responsibility. He definitely needs to wrestle with some guilt right now. Victor’s suffering won’t bring Adam back, but we’ll enjoy it anyway. Adam’s memorial will be held and his family members will try to say goodbye. Nick (Joshua Morrow) will likely get choked up about losing his brother.

Adam made Nick promise to look after Chelsea (Melissa Claire Egan) and Connor (Ryder and Gunner Gadbois). He’ll plan on keeping that promise as everyone attempts to move forward. Chloe will share an intimate chat with Chelsea in the midst of her grief. She’ll note that Chelsea and Connor are being so brave.

Chelsea will reply that this isn’t brave. This is putting one foot in front of the other. Chloe will probably draw from her own experience as she supports Chelsea. She may talk about how she felt after Delia’s (Sophie Pollono) death and compare it to how she feels now.

Chloe’s comfort is appalling when you consider her actions. She’s the one who refused to hand over the journal entries. Her ruthlessness kept Adam in prison long enough for him to really lose it. He wouldn’t have attacked the guard if she had refused to aid Victor’s scheme or she had at least played by the rules.
To make matters worse, Chloe couldn’t even let Adam escape with his family.

She shot Adam with a tranquilizer dart and snarled that she wanted to watch him die. We don’t know what happened after that, but it’s not important. Even if Chloe wasn’t behind the cabin explosion, she’s still despicable.

Will Chloe eventually get her comeuppance? Was there anyone else involved in the fiery scene? Will Victor see that justice is served? We’ll give you updates as more news emerges. Stay tuned to Y&R and don’t forget to check CDL often for the latest Young and the Restless spoilers, updates and news.