The Young and the Restless Spoilers (Y&R): Billy Abbott in Coma on Deathbed – Transition from Burgess Jenkins to Jason Thompson 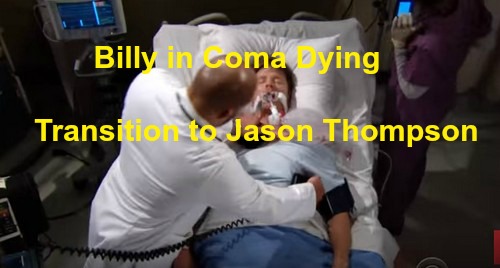 “The Young and The Restless” (Y&R) spoilers reveal that the Billy Abbot actor switcheroo is happening soon and it will likely come out of Billy’s near death medical crisis as a result of a brutal beating at the hands of his bookie’s henchmen compounded by being struck by a car.

Recent Y&R spoiler video shows Burgess Jenkins in a coma, kitted out with a neck brace, and looking direly close to death while his loved ones gather to mourn and lay blame. Looks like this is the set up for Billy to emerge from the ordeal, quite literally, as a new man with Jason Thompson assuming the role.

Y&R spoilers indicate that Billy has a 50/50 shot at surviving – according to an announcement that Jack Abbott (Peter Bergman) makes to Phyllis Newman (Gina Tognoni). Jill Abbott (Jess Walton) is horrified when the doctors tell her that her son is being kept alive by machines.

Victoria Newman (Amelia Heinle) will be wracked with guilt since she thinks throwing Billy out and calling off their marriage at Christmas has contributed to his downward spiral. We’ll see Billy go into cardiac arrest this week and he’ll flat line.

But, we know he’ll come back out of this crisis – just wearing another face. One of the things that Billy’s bookie mentioned when his thugs worked Billy over was that they shouldn’t have damaged his face – but they did.

However, as Billy lies in the hospital bed, his face is clearly still recognizable as Burgess Jenkins. Will TPTB simply replace Jenkins with Jason Thompson without explaining the change of face? Or will they have Thompson quip that “he feels like a new man” and is ready for a fresh start?

Soaps usually send a character away or devise a plastic surgery scenario but it would be easier to make the swap without comment. Y&R showrunner Jill Farren Phelps was helming General Hospital when they twice swapped the actress playing Carly Corinthos – with Tamara Braun then Laura Wright.

This was accomplished with a simple announcement that Carly Benson will now be portrayed by… Hopefully Phelps will do the same at Y&R that she did over at GH and not try to over-explain or justify the recast since Y&R fans know it’s coming.

New Billy will wake to find that his family has torn themselves apart over his medical crisis. Phyllis blames Jack for being too harsh on Billy and Jill blames Victoria, Jack and Victor Newman (Eric Braeden) for their harsh treatment of “Billy Boy.”

Word has it that Jason Thompson left GH, in part, because he felt that he wasn’t get enough front and center time with gripping storylines. At Y&R, though, Thompson will step into some juicy drama right off the bat.

What do you think Y&R fans? Are you excited about the transition from Burgess Jenkins to Jason Thompson? Or do you wish they had left the casting as it was? What do you hope for Billy as he wakes from this near-fatal crisis?

Share your thoughts in the comments below and come back to CDL often for more “The Young and The Restless” spoilers, news and updates.