The Young and The Restless (Y&R) Spoilers: Chelsea Exposes Ian-Adam Escape Plan to Victor – Begs The Moustache For Help 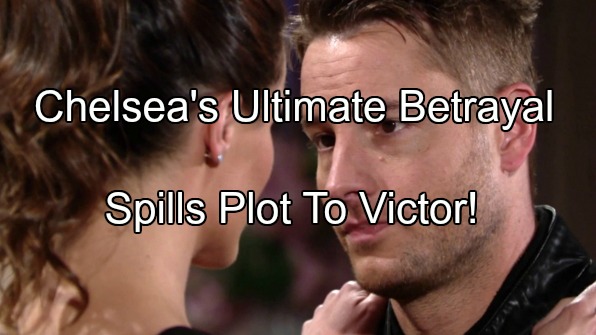 “The Young and The Restless” (Y&R) spoilers reveal that Chelsea Newman (Melissa Egan) will make a big move on this week’s episodes that could make her Adam Newman’s (Justin Hartley) hero – or wreck their marriage. Which way will it work out when Chelsea exposes Adam’s plan?

The Young and the Restless spoilers say Adam will soon go to see Ian Ward (Ray Wise) in prison again to review Ian’s testimony so Adam feels confident that the former cult leader will do as he promised. Chelsea smells something off and confronts Adam about what he’s hiding from her.

After Chelsea prods him, Adam will come clean that he’s scheming with Ian who will offer testimony that Victor Newman (Eric Braeden) framed him. The problem is, it doesn’t seem like Victor did this – at least not from any conversations we’ve seen.

Ian can say anything on the stand, so that’s the first problem. The second problem is that Ian plans to use the court appearance as a venue for escape. Y&R spoilers say Adam figures out the escape scheme and offers to help, but Chelsea knows this is bad.

Chelsea can see what Adam can’t – that Ian is setting him up. Adam has literally burned Ian before by leaving him to die in the Newman Tower blaze. Plus, Adam turned on him in the Paragon scheme. The Young and the Restless spoilers there’s no way that Ian will forgive and forget.

Ian’s best-case scenario is to betray Adam, implicate him in Constance’s death, then escape. That way Ian gets revenge on Adam and walks free. When Chelsea hears Adam’s plan, she knows things will go sideways so she does something desperate.

Chelsea will go to Victor, reveal the plan, and beg The Moustache to do something. Victor has denied any involvement in the Adam set-up but when he hears the Ian-Adam plan, he may get some clarity. Ian could have rigged the Sage diary.

Victor doesn’t want Adam in jail – that’s his golden boy – the child of Victor’s most like himself. Y&R spoilers tease that Victor could blow this scheme up. Victor knows that Ian will take the stand and implicate Adam, not exonerate him.

So the best thing to do is make sure Ian doesn’t testify. Will Victor blab the escape scenario to Dr Gates (Alicia Coppola) so she can warn the warden? Expect Victor to step up in some way to protect Adam from Ian and thwart Ian’s plans.

Victor will have further motivation from Chelsea to help Adam – she dangles a carrot. Chelsea knows Victor wants Adam in the CEO chair at NE until Victor can resume the seat of power. Chelsea hates Adam being there, but better at NE than in prison.

Chelsea will tell Victor she can convince Adam to push Victoria out as CEO and take his rightful place as Victor Newman Jr. That’s an offer Victor can’t refuse since he can’t seem to get Adam to agree to go back to NE – but Chelsea can.

What do you think Y&R fans? Can Victor ruin Ian’s plans to destroy Adam’s life? Will Adam be furious at Chelsea scheming with his dad? Will Chelsea save Adam only to wreck their marriage? All of this kicks off this week on the CBS soap!