‘The Young and the Restless’ Spoilers: Christian Reveal Consequences – Does Sharon Belong with Dylan, Nick or Adam? 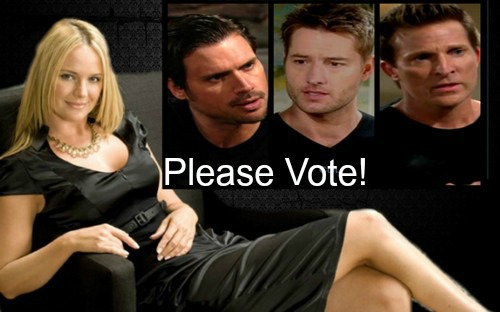 The Young and the Restless (Y&R) spoilers tease that trouble is brewing for Sharon (Sharon Case). Once Sharon’s secret is revealed, she could get on the bad side of her love interest options. Dylan (Steve Burton), Nick (Joshua Morrow) and Adam (Justin Hartley) are all connected to the baby drama.

Of course, Y&R fans know that everything blows over at some point on the CBS soap. These leading men could forgive Sharon sooner or later. That means Sharon still has a chance to keep her current love alive or reunite with a former flame.

First, we have Dylan. He’s one of the sweetest husbands in Genoa City. Dylan adores Sharon and tries to make her feel supported. However, some Young and the Restless viewers think Dylan and Sharon are a bit bland as a couple. They’re cute, but we don’t see a lot of fireworks going on.

If you’re not a big Dylan fan, perhaps you’re rooting for a reunion between Sharon and Nick. These two have quite a history and they always seem to find their way back to each other. Their strong friendship could easily turn to love once again.

Nevertheless, the fact that Sharon has been raising Christian could change that. After the truth comes out, we’ll undoubtedly see more communication between Adam and Sharon. Since Adam stole Faith (Alyvia Alyn Lind) as a baby, maybe he’ll find a way to understand Sharon’s actions. People can do bad things without having malicious intentions.

Sharon and Adam could end up growing closer down the road. The chemistry question may not matter if Hartley’s new NBC series, This Is Us, becomes a hit. Hartley reportedly plans to juggle both shows, but there’s no guarantee he’ll stay at Y&R indefinitely. If Hartley moves on, a recast could be brought in.

Who knows? The next potential Adam might be the perfect match for Sharon. This would wreck the popular pairing of Chelsea (Melissa Claire Egan) and Adam, so we need to keep that in mind! Still, this doesn’t have to be a forever love. It wouldn’t hurt to mix it up for a while.

The Christian angle is going to be interesting to explore. Nick bonded with Christian in the NICU and he’ll probably feel a connection with him even after the true paternity is exposed. Sharon also loves this baby like he was her own. Nick will be angry at first, but he could soften later on.

If Adam decides to step up and be a father to Christian, Sharon and Nick could eventually comfort each other over the loss. Dylan could quickly get muscled out. On the other hand, Nick might push Sharon away due to her deception.

In that case, Dylan might stand by Sharon and help her through the crisis. In other words, we could be dealing with several different outcomes. We’ll give you updates as more news comes in about this storyline.

Regardless of what might happen, who do you want Sharon paired with? Does Sharon belong with Dylan, Nick or Adam? Vote in our Y&R poll and don’t forget to check CDL often for the latest Young and the Restless spoilers, updates and news.