The Young and the Restless Spoilers: Love For Chloe Drives Kevin to The Dark Side 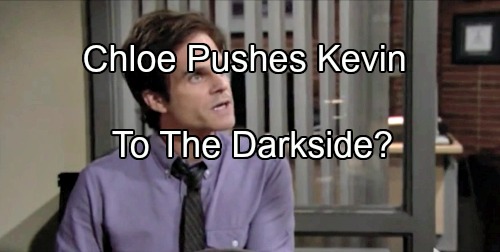 The Young and the Restless (Y&R) spoilers fans are very familiar with Kevin (Greg Rikaart) and Chloe (Elizabeth Hendrickson). They also know that ‘Khloe’ has been over for awhile. Sadly, Kevin hasn’t been able to move past his feelings for his ex-wife and pining for her now that she’s returned to town doesn’t bode well for his mental health.

Kevin is a poor soul. His father, ‘Terrible Tom Fisher’ (Roscoe Born), treated him like an annoyance and often locked him in the closet at home when he’d done nothing wrong. His brother, Michael (Christian LeBlanc), and mother, Gloria (Judith Chapman), didn’t do nearly enough back then to help him, which only exacerbated the situation.

So, Kevin retreated into his own world in order to cope. Later in life, unable to deal with the emotional spillover, he became prone to violent impulses and committed numerous criminal acts.

His eventual pairing with Chloe did produce some positive results. He truly loved her daughter, Delia (Sophie Pollono), and exhibited natural parenting skills. However, fallout resulted from Delia’s tragic death, which included the end of Kevin’s marriage to Chloe, as previously documented by The Young and the Restless spoilers.

Chloe never loved the man who was Delia’s father, Billy (then played by Billy Miller and now by Jason Thompson). He was the object of her obsession from the moment she first saw him in New York. Then, after Delia died, she revisited those misguided thoughts and illegally obtained Billy’s genetic sample to create a second child, Bella (Cali May Kinder). without his knowledge.

Based upon the timing of their last romantic encounter and Bella’s current age, Kevin naturally thought that Bella might be his child. His requested DNA test appeared to confirm that he wasn’t. But, this is Y&R and Chloe is connected. So, who knows what will prove true.

Regardless of Kevin’s current, or future, fatherhood status, his honed hacking skills may lead him to discover that Chloe was the mystery woman Victor (Eric Braeden) worked with to frame Adam. That realization will be a test for Kevin, as he might possess the ability to cover for her out of a sense of lingering obligation. Whether he uses that potential power to force Chloe into reuniting is another matter to consider as well. Will love drove Kevin to the Y&R dark side?