The Young and the Restless (Y&R) Spoilers: Marco Alive – Teams Up with Luca for Victor Revenge Scheme 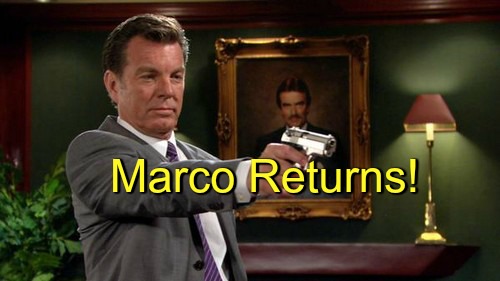 “The Young and The Restless” (Y&R) spoilers hint that Marco Annicelli (Peter Bergman) may soon be back on the scene in Genoa City to exact revenge on Victor Newman (Eric Braeden). Will Luca’s dad – the Santori patriarch – send Marco in as backup for his son?

Luca Santori (Miles Gaston Villanueva) is doing an admirable job of facing down both Victor and Adam Newman (Justin Hartley) but his evil pops may not think Luca has the chops to follow through, play hardball and get his hands dirty to conquer the Newmans.

But what Luca’s father does know is that he wants the Santoris to control Newman Enterprises. We’ve already seen that Victor is not acting rationally when it comes to accepting the reality of the evidence that Luca has against him.

Luca threatened Victor with evidence that he engaged in criminal activities with Marco that could see Victor behind bars for good. Alongside that, Luca threatened to make sure that Noah Newman (Robert Adamson) is in a neighboring cell for the hit and run of Billy Abbot (Jason Thompson).

Even though Luca clearly has Victor caught between a rock and a hard place, The Moustache is not one to back down, even when it means a terrible outcome for him and his grandson. Victor will continue to push back on Luca and that means Marco may be sent in to get Victor in line.

If a folder of evidence is bad news for Victor, the very villain that Victor used to engage in criminal schemes is even worse of an outcome. We were told that Marco died, but does anyone really believe that?

Marco is a mega-villain – why would Y&R showrunners let him die such a quick death? Don’t buy that bit of subterfuge. It’s far more likely that Marco will return to Genoa City to make trouble for Victor by teaming up with Luca – all on behalf of the elder Santori.

Not only would the return of Marco be bad news for Victor, but it could be earth-shattering for Phyllis Newman (Gina Tognoni). Phyllis herself is intent on destroying Victor but Marco’s presence could shift her focus.

Could Phyllis and Victor actually work together to banish Marco from Genoa City and take him down once and for all? Or is Phyllis too focused on retribution against Victor to go after her hubby’s doppelganger that took advantage of her for so long?

We do know that Luca brought up Marco again out of the blue recently – was that foreshadowing upcoming events? Will the one eared devil soon be back in Genoa City doing dirty deeds for the Santoris?