‘The Young and the Restless’ Spoilers: Nick Wants Nikki to See Victor’s Guilt – The Moustache Reassures Chelsea He’ll Save Adam

BY Marcy Cohen on August 22, 2016 | Comments: one comment
Related : Soap Opera, Spoiler, Television, The Young and the Restless 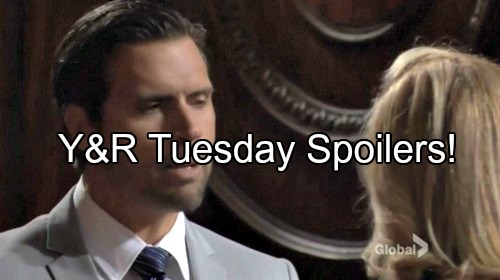 The Young and the Restless (Y&R) spoilers for Tuesday, August 23, tease that Stitch (Sean Carrigan) will monitor the guard who was brutally attacked by Adam (Justin Hartley). Unfortunately, it seems there’ll be no change in his condition. The guard has slipped into a coma and there’s no guarantee he’ll come out of it.

Stitch will give Abby (Melissa Ordway) and Dylan (Steve Burton) updates on the situation. Dylan will hate that this happened when Adam was so close to freedom. If they had been able to get the news to him sooner, Adam would be home enjoying life with Chelsea (Melissa Claire Egan) and Connor (Gunner and Ryder Gadbois).

Nevertheless, it’s no use crying over spilled milk – or comatose guards. Adam did the crime and now he intends on doing the time. After pleading guilty in Monday’s Young and the Restless episode, Adam will prepare to face consequences for his actions. Of course, the people Adam holds near and dear will be against his decision.

The Young and the Restless spoilers reveal that Nick (Joshua Morrow) will make a solemn vow to Adam. Will Adam make Nick promise to look after Chelsea and Connor? If so, that’s a bad idea. Y&R buzz suggests that Nick and Chelsea might get together at some point. Adam could be inviting it to happen.

Then again, perhaps Nick will just vow to get Adam out of this mess. Even if Adam stands by his guilty plea, there’s a chance that Victor (Eric Braeden) can help out with a future appeal. The drama is far from over.

Victor will assure Chelsea that he’ll do everything in his power to help Adam. He’ll add that Chelsea shouldn’t doubt it for a minute. Nick will certainly wonder if Victor has Adam’s best interests at heart. He’ll try to convince Nikki (Melody Thomas Scott) that Victor framed Adam, but she’ll probably defend her hubby as usual.

Nikki knows how Victor operates, but she’s living in a state of denial these days. Regardless of what Nick says, Nikki will join forces with Victor to protect their loved ones. She’ll get caught up in one of Victor’s schemes, but maybe that’s a good thing. Victor needs all the help he can get right now. He has a lot on his plate.

Victor’s top priority is getting Adam off the hook, but he intends on devoting some time to his Luca (Miles Gaston Villanueva) plot as well. That might be where Nikki will offer some assistance. Everyone except Summer (Hunter King) can see that Luca is shady. Even if he wasn’t, Summer is taking this relationship way too fast.

It looks like Victor won’t the only one with a plan in motion. Noah (Robert Adamson) will pop up soon and he’ll immediately start brainstorming. He’ll want Summer to realize that she’s about to marry a slimeball. Will someone succeed in tearing Luca and Summer apart? Stay tuned to Y&R and don’t forget to check CDL often for the latest Young and the Restless spoilers, updates and news.