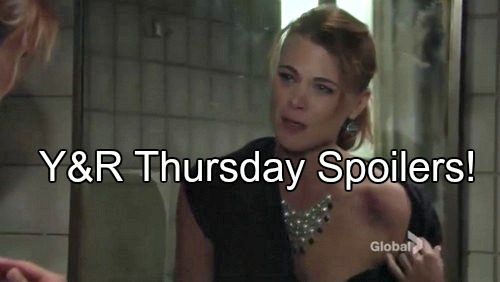 “The Young and the Restless” (Y&R) spoilers for tomorrow’s episode, Thursday, June 2, tease that Paul (Doug Davidson) will meet with Victor (Eric Braeden) in prison. Victor may try to squeeze in a little small talk, but Paul will urge him to cut to the chase. He’ll demand to know what’s going on.

Victor will warn Paul to fasten his seatbelt. Whatever he’s going to spill could be more than Paul bargained for. Will Victor’s revelations have something to do with Adam (Justin Hartley) and his upcoming trial? Victor let Meredith (Alicia Coppola) know that he was sitting on major evidence. It’s possible that it’s ready for launch.

Of course, Victor is rarely honest. He may have been cozying up to Meredith by showing her that he was still willing to help Adam. If the evidence actually exists, Y&R spoilers indicate there’s a good chance it’s fake. Victor’s powers can’t be contained by the walls of the state pen. He always has a minion or two waiting to cook up some “proof” or take care of any other matters that need his attention.

Victor might even throw everyone for a loop and reveal something totally unexpected. It may not even involve Adam at all. It’s tough to predict The Moustache’s moves. Elsewhere, Billy’s (Jason Thompson) latest move has landed him in the hospital. While the doctors check him out, Stitch (Sean Carrigan) will learn Billy was found alone at the scene.

However, someone called 911 to report the accident. The news will make Stitch realize there’s more to the story. As Stitch mulls it over, he’ll have to face Billy’s visitors. Jack (Peter Bergman), Jill (Jess Walton) and Victoria (Amelia Heinle) will rush in for updates on Billy’s condition.

Other “Young and the Restless” spoilers say Phyllis (Gina Tognoni) will assess her own injuries in a secluded restroom. She’ll wince in pain as she slides her shirt off her shoulder. The crash left Phyllis with a sizable bruise. The emotional aftermath will be just as painful for Phyllis. She’ll be a complete mess as she tries to process all of this.

What will Phyllis do now? If her shoulder isn’t too banged up, then Phyllis might be able to hide her involvement in the accident (at least briefly). Nevertheless, don’t bet on Phyllis getting off scot-free. She’s going to face questions and her answers may raise red flags.

Y&R spoilers indicate that someone will find out about Phyllis and Billy’s affair soon. It appears it will be somebody who’s willing to use that information against Phyllis. That plan sounds right up Hilary’s (Mishael Morgan) alley, so more blackmail could be coming up.

How will Phyllis combat the emerging threat? Stick with the CBS soap to see what lies ahead.