BY Heather Hughes on February 14, 2016 | Comments: one comment
Related : Soap Opera, Spoiler, Television, The Young and the Restless 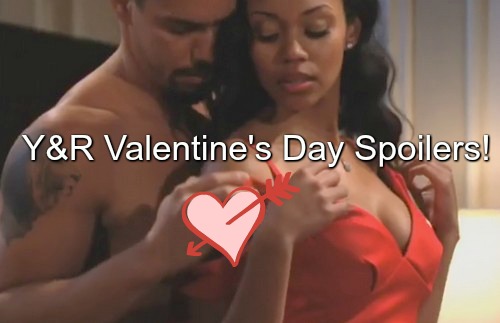 “The Young and the Restless” (Y&R) spoilers for Monday, February 15, reveal that Hilary (Mishael Morgan) will once again approach Devon (Bryton James) about the idea of reuniting. Devon waited on Hilary to come around for months. When Hilary was finally ready, Devon just wasn’t sure he could do it. He’d become disheartened after such a lengthy delay.

Nevertheless, Hilary will be persistent her fight to win Devon back. “The Young and the Restless” spoilers say Hilary will ask Devon to give their relationship one more chance. Devon will realize that he needs to at least give this a shot. It wasn’t Hilary’s fault she couldn’t remember the love they shared. Now that Hilary’s memory has returned, they have the opportunity to start over and that’s exactly what they plan to do.

Devon and Hilary will rekindle their passion just in time for Valentine’s Day in Genoa City. This will almost be like a second honeymoon. After all, Hilary and Devon missed out on most of their first one thanks to Neil (Kristoff St. John). They’ll make love and consider their plans for the future.

Meanwhile, another Y&R couple will be getting hot and heavy as well. It looks like Cane (Daniel Goddard) and Lily (Christel Khalil) are truly putting their issues behind them. They’ll enjoy a secret sexy encounter to solidify their relationship. It’s nice to see these two getting along for a change.

As romance fills the air, Victor (Eric Braeden) will suggest that Natalie (Mara McCaffray) should focus on something besides love. Time is ticking away and Victor wants the bugs worked out of the program ASAP. Victor will let Natalie know that she needs to concentrate on giving him a successful product.

Natalie will probably tell Victor that she’s on top of it, but we know that she’s actually working hard for someone else. Phyllis (Gina Tognoni) and Billy (Jason Thompson) also expect Natalie to deliver what she’s promised. They have a lot riding on this revenge plot.

Of course, there’s a good chance that they’ll all get somewhat burned in the end. As the drama reaches a climax, these schemers could face their downfall. Stick with “The Young and the Restless” for updates on the chaos ahead.

So Y&R fans, what do you think about the news that Hilary will convince Devon to try again? Will Cane and Lily take their reunion public soon? Are Natalie, Billy and Phyllis playing with fire? Voice your opinion in the comments below and don’t forget to check CDL often for the latest “Young and the Restless” spoilers, updates and news.

There’ll be lots of X’s and Oh’s this week on @youngandrestlesscbs! #YR #CBSdaytime