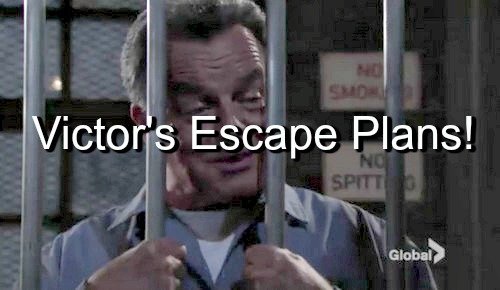 “The Young and the Restless” (Y&R) spoilers for tomorrow’s episode, Tuesday, April 12, tease that Leslie (Angell Conwell) will arrive at Newman Enterprises and Billy’s (Jason Thompson) deposition will get underway.

Billy will explain how he learned about Passkey and why he wanted to get involved. When Billy’s coma comes up, he’ll state that he had to get back to Victoria (Amelia Heinle) and their children.

Victoria will suggest that’s a lie. She’ll think Passkey was more of a factor than Billy is willing to admit. After Victoria’s outburst, Billy will turn to Phyllis (Gina Tognoni) for comfort. They’ll share a hug as they deal with this mess. Y&R viewers can expect Phyllis and Billy to have a real dilemma on their hands by the end of the week.

Speaking of dilemmas, Summer (Hunter King) will be faced with one in Tuesday’s episode. She’ll be torn about what to do at her deposition, but Kevin (Greg Rikaart) will think there might be a way to avoid the trouble. “The Young and the Restless” spoilers say Kevin will urge Summer to talk some sense into Victoria.

Phyllis won’t be convinced that’s the answer, but Summer will insist that she’s not on board with perjury. After Victoria refuses to accept the deal, Luca (Miles Gaston Villanueva) will suggest that Summer will be forced to tell the truth. He’ll think that’s the only option.

Meanwhile, Nikki (Melody Thomas Scott) will go to an AA meeting to appease Jack. He’ll keep Nikki’s drinking a secret for now, but his concerns will remain. Nikki will have a dream about Victor (Eric Braeden) breaking out of prison and finding her. They’ll lean in for a kiss before Nikki awakens.

It looks like Nikki’s dream may not be too far from reality. In prison, Victor will pick up on some hints dropped by Ian (Ray Wise). He’ll ask if Ian has a plan to get out of there. Ian will be pleased to have Victor’s attention and he’ll imply that those prison walls can’t hold him.

The warden will send Ian back to his cell and give Victor the news that a guard came after him and was responsible for the stabbing. That guard has now been fired. The Young and the Restless spoilers say Victor will ask if Ian bribed the guard, but the warden won’t have any answers.

It’s possible that Ian was already trying to make Victor take notice. Could Ian have set up the recent attack as motivation or was it someone else?

Vic is certainly feeling the heat now. He probably wants out more than ever.

On the other hand, maybe Ian is telling the truth. Perhaps Ian had nothing to do with the stabbing and he just wants to team up. Marco (Peter Bergman), the Santoris or anyone else with a vendetta could be behind the attack. In that case, Ian and Victor could come up with an agreement to take care of the situation.

The easiest solution is to form a strategy to escape. Ian has some experience with that. Back when Paragon took center stage, Ian had quite a vacation away from the slammer. “Fred” even enjoyed fish with Phyllis in the midst of his “puppet show.”

Ian’s skills could be incredibly useful for Victor. Likewise, Victor’s resources could come in handy for Ian.

Will Victor and Ian work together to blow this joint? It’s tough to say. Victor is obviously having a few doubts about Ian’s motives. He might manage to gain his freedom without taking help from the enemy. Stick with the CBS soap for updates on Victor’s big scheme.