‘The Young and the Restless’ Spoilers: Week of August 1-5 – Bella’s Paternity NOT Revealed by Test – Chloe Exposed 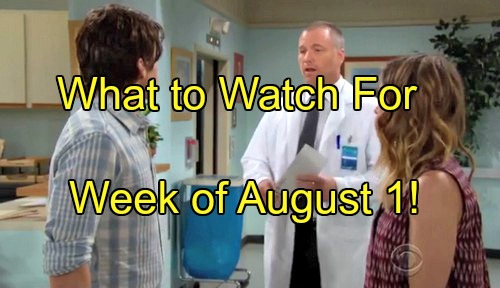 The Young and the Restless (Y&R) spoilers for the week of August 1-5 tease that some shocking revelations are on the way. Adam (Justin Hartley) will realize that Chloe (Elizabeth Hendrickson) must be Victor’s (Eric Braeden) secret partner. Once Adam solves the puzzle, he’ll be ready to secure a confession.

Luckily, Chelsea (Melissa Claire Egan) can play the role of a loving BFF and hopefully gain valuable information from Chloe. She’ll invite Chloe and Bella (Cali May Kinder) to move in, which means there’ll be plenty of chances for Chloe to let something slip. Chelsea will certainly keep her eyes and ears open.

Other Young and the Restless spoilers say Nick (Joshua Morrow) will have a lot on his plate this week. First, Nick will discuss Sage’s (Kelly Sullivan) diary with Dylan (Steve Burton). Since Sage’s journal entries were forged, Nick will point out that the genuine ones must still be out there.

Nick is little late to this real diary search party, but we’ll give him a pass. He’s been awfully busy trying to get rid of Luca (Miles Gaston Villanueva). Unfortunately, Summer’s (Hunter King) big news could leave her connected to Luca forever. She’ll announce that she’s late and may be pregnant.

Is Summer really expecting or is this a false alarm? We’ll have to wait and see, but Victor (Eric Braeden) certainly won’t be pleased if Summer brings another Santori into this world. There could be some fun possibilities with this storyline…

Meanwhile, Cane (Daniel Goddard) and Billy (Jason Thompson) will struggle with more conflict. Jill (Jess Walton) is forcing them to work together, but it’s not going well. Of course, Jill also has plans to reunite Victoria (Amelia Heinle) and Billy. Y&R spoilers suggest this scheme could hit some snags.

Elsewhere, Hilary (Mishael Morgan) will ruffle a few feathers. Her snobby attitude is subsiding slightly, but don’t expect her to be a ray of sunshine. We’ll still see Hilary’s trademark hostility. However, Ashley (Eileen Davidson) will be sure to fire back.

Hilary tends to rub most Genoa City residents the wrong way. Ashley won’t be the only one who takes on Hilary this week. The Young and the Restless spoilers say Lily (Christel Khalil) will come up with sneaky plot. She’ll probably hope to make Hilary pay and keep her far, far away from Devon (Bryton James).

It sounds like Lily’s move could lead to some family problems. Speaking of those, Kevin (Greg Rikaart) will face intense baby drama. He’ll think it’s crazy that he might be a dad. Kevin may not want to start planning tea parties for Bella just yet. Let’s wait for Stitch’s (Sean Carrigan) DNA updates first. Y&R spoilers say that Bella’s paternity will not be revealed by this test.

Finally, Y&R will throw in a bit of humor as Dylan, Sharon (Sharon Case), Mariah (Camryn Grimes) and Faith (Alyvia Alyn Lind) all head out on a camping trip. We’ll see some comical moments as Dylan helps these ladies adjust to life in the great outdoors. Stay tuned and don’t forget to check CDL often for the latest Young and the Restless spoilers, updates and news.