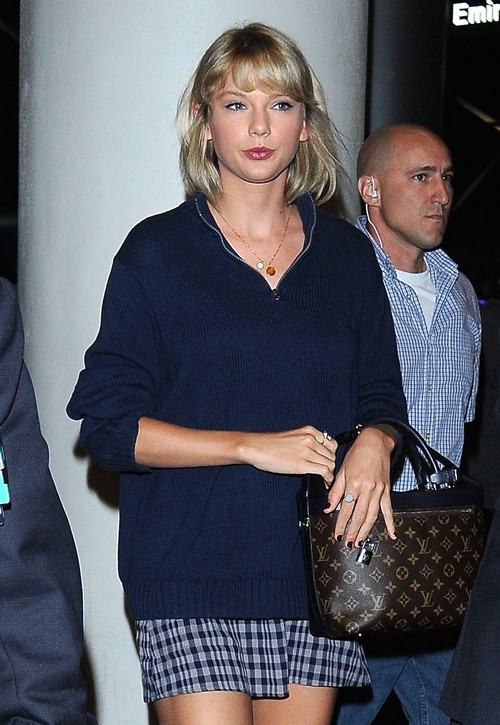 Taylor Swift is outraged that boyfriend Tom Hiddleston has been eliminated to take over Calvin Harris’s role as the face of Armani. Taylor Swift and Tom Hiddleston’s ‘showmance’ is nothing but an embarrassment for the British actor, apparently. In fact, there’s even a new report that suggests Tom Hiddleton’s Armani dreams have been crushed thanks to his very public relationship with the ‘Bad Blood’ singer and all of her staged photo-ops.

Not only has Tom Hiddleston’s James Bond role not going to happen, but it looks like he is losing all sort of jobs and potential campaigns because of his girlfriend. To make things worse though, there’s even speculation that Tom Hiddleston is no longer in the running to front Armani’s latest ad campaign. The designer is looking to replace Taylor Swift’s ex-boyfriend Calvin Harris, who happened to be the face of Armani’s campaign last year.

According to the Daily Mirror, one source said, “Tom was on the shortlist as they examined who could take over from Calvin. Obviously with Tom now being Taylor’s other half and the Calvin past deal, it would generate huge media coverage and headlines. But Armani see themselves as classier than that and think that a rising sports star may suit their current needs better. Armani would hate to be seen as getting PR for their brand by riding on Taylor Swift’s coat tails, so Tom will not get the job.”

To make matters worse, insiders believe that Tom Hiddleston might not be sexy enough and ‘too old’ to be the face of such an important international campaign with a top fashion house like Armani. This has got to sting for someone like Taylor Swift, whose public image means everything to her.

Certainly, the ‘Shake It Off’ singer doesn’t want people to think that she’s dating some one ‘old’ and not sexy enough for an Armani contract. Plus, this would also mean that Tom Hiddleston is a downgrade for someone like Taylor Swift.

If Calvin Harris can model in a black-and-white underwear ad for Armani, then obviously Tom Hiddleston can do it too, or at least according to Taylor Swift, do it much better. But if he’s “too old” and not sexy enough to show off his muscular physique in a coveted campaign the same way Calvin Harris did last year, then this will not only embarrass Tom Hiddleton, but totally humiliate an image-obsessed Taylor Swift.

Tell us CDL readers, what do you think? Is Tom Hiddleton’s age the real reason why he lost out on an Armani campaign? Or is the Taylor Swift and Tom Hiddleton showmance the problem? Drop us a line with your thoughts in our comments section below.