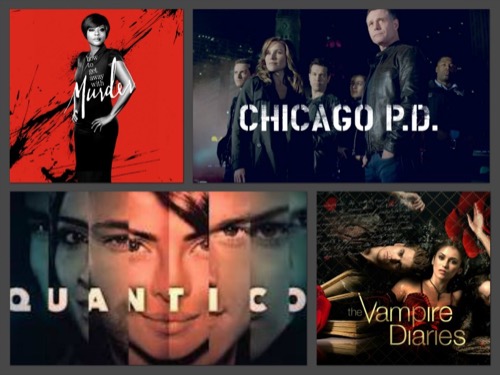 It is almost time for the return of Season Two of “Quantico” on September 25th. In the first season finale, we see Alex Parrish (Priyanka Chopra) making a phone call to join the CIA. Don’t worry fans, Alex and Ryan Booth (Jake McLaughlin) are totally a couple when the season starts. But knowing Quantico, you can guarantee something is going to happen to turn their lives upside down, and life won’t be perfect for the pair just yet! We are teased by being told something goes horribly wrong between Alex and Ryan within the first 45 seconds of the premiere. What could that “something” be?

Shonda Rhimes’ “How To Get Away With Murder” returns on September 22nd, and fans are dying to know what is going to happen with one of the core characters, Wes Gibbins (Alfred Enoch). We are told that answers are coming soon about the death of his dad. The finale of season two left us hanging with Wes telling a man “I think I am your son” and the second the words leave his mouth, the man is shot and you see Wes standing in his blood. Executive Producer Pete Nowalk says, “We will answer a very important question right when we pick up in the show and then we will move past it.” Will this season be focusing on Wes trying to find a way out of a murder charge, or will he be left with more questions than answers again?

“The Vampire Diaries” will be returning on October 21st and fans have been wondering about how Stefan Salvatore (Paul Wesley) and Caroline Forbes (Candice King) are going to manage their relationship, and if they are truly in it for the long haul. Caroline has agreed to move back to Mystic Falls. She is working at the local news station, trying to be the perfect mama to her twin daughters and trying to juggle her relationship with Stefan; which is proving to be harder than it sounds. Damon Salvatore (Ian Somerhalder) has gone missing and this is weighing heavily on Stefan. Can their relationship survive all the big moves and shifts it has recently endured?

“Chicago P.D.” will start its 4th season on September 21st and there is a lot of questions overshadowing its return. The show follows District 21 of the Chicago Police Department, which is split into two groups: the uniformed police and the Intelligence Unit run by the unconventional, but hardcore Hank Voight (Jason Beghe). Season 3 left us off with Hank Voight taking matters into his own hands when his own son, Justin (Josh Segarra) was attacked and died from his injuries, leaving his young wife to raise their baby boy alone. We are not sure how this is all going to play out, nor if Voight will even be found out.

One storyline that keeps getting questions is about Erin Lindsay’s (Sophia Bush) parents. We have met her mother, which explains why Hank Voight and his wife ended up raising Erin from her mid-teens onwards, but the constant question is, who is her father? Executive Producer Matt Olmstead reveals it is still in the early stages, but there is a good chance we will be meeting him this year.

As the spoilers continue to be revealed, check back often for updates, spoilers and news on all your favorite shows!