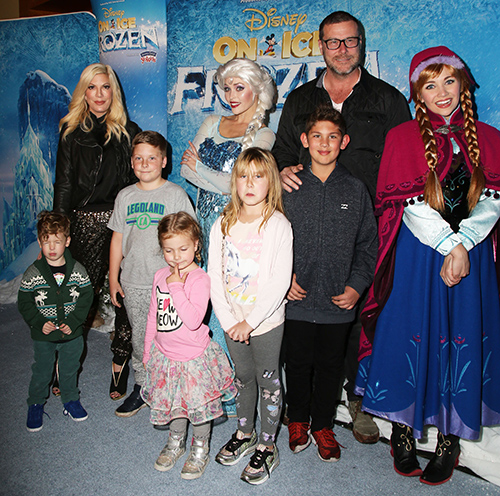 Are Tori Spelling and Dean McDermott headed for divorce? Allegedly, the couple constantly argues over money – and Tori has been accused of exploiting daughters Stella and Hattie to pay the bills. The former “902010” star is desperately trying to keep the family afloat financially. A source revealed to Star that Tori recently decided that managing the little ones’ careers is the next best thing to having a job of her own. Tori Spelling – momager extraordinaire?

Kris Jenner could definitely give Tori some tips on how to use your kids to build a multi-million dollar empire full of emojis, apps, oversharing on social media, and more! Someday, maybe Stella and Hattie can swap stories with Kendall Jenner and Kylie Jenner of lives ruined by momagers who stole their childhood as well as their money.

A source recently told Star that Tori “sees her daughters as her meal ticket.” Managing the young ones’ careers will allow Spelling, according to the insider, “To still get in on the Hollywood action as her own star power is fading.” Tori Spelling has star power? When? Wasn’t it daddy Aaron Spelling who held all the cards? Mommy Candy Spelling certainly holds all the money.

What does Dean McDermott have to say about all this? Apparently, Dean wants the kids to have a normal life and focus on their education, the source divulged. A normal life? These has-beens have been exploiting their children through various reality television shows for years.

The couple’s oldest son, Liam, was born in 2007 – the same year “Tori & Dean: Inn Love” premiered on the Oxygen Network. It doesn’t take a genius to figure out Liam, Finn, Stella, and Hattie’s chance for a normal life disappeared before they were even born!

Dean doesn’t want the kids in showbiz but Tori does? Somehow we think Dean McDermott wouldn’t give Tori Spelling much of a fight if Stella and Hattie landed commercials or movie roles. Anything to keep the money rolling in right? Would it surprise anyone if this couple calls it quits?