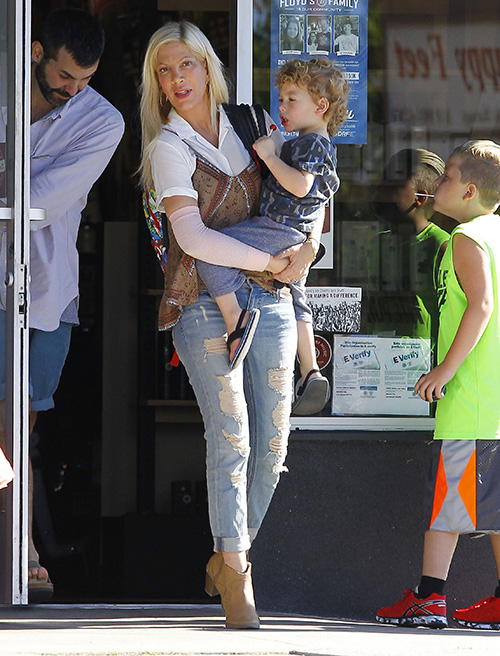 Tori Spelling and Dean McDermott‘s financial situation has hit an all-time low. According to Radar Online on September 24, it appears that Tori is totally broke and begging her friends and family for cash. She may even lose her storage units – all because she cannot come up with the money to pay her fees. Is it possible that Tori Spelling and Dean McDermott are flat broke and resorting to begging loved ones for money?

The last time Tori was in the news was a few weeks ago; Tori was paranoid that Dean would be one of the accounts exposed in the Ashley Madison leak. She forced him to allow her to look in his laptop, sure she would find a clue that he was cheating once again. His name was not released in the hacker leak, and he claimed that he had never been associated with the website.

Tori and Dean are struggling to make ends meet. An inside source revealed that she was having trouble paying her storage bills and is facing losing her possessions. On the Lifetime reality show, True Tori, she revealed that her storage bill alone was almost $1,000 a month. The storage company is threatening her. Apparently, if she cannot get her dues current, she could lose her units – and they will auction her treasured items.

Since her show ended last year, neither Dean nor Tori has any employment possibilities lined up. Her friends suggested that they should consider a job outside of acting or reality TV. Tori reportedly scoffed at the idea. She claimed, “I don’t know how to do anything else.” Tori claims that she is not able to work because she has an injury to her arm she suffered at the Benihana restaurant a few months ago. She is suing the establishment after she fell on the hot grill.

Recently, the couple was forced into moving from their large rental to a smaller home. The couple was so strapped for cash; she was not able to hire movers to assist in the move. They rented a U-Haul and moved their own belongings. In her latest book, “Spelling it like It Is,” she revealed she was in serious debt after investing in few bad real estate deals. According to an inside source, they have slipped months behind on their children’s private school tuition dues.

Do you think Tori Spelling is broke? Do you think her friends are right- and she should find work outside of show business? Don’t forget to check back for all of your celebrity news, gossip and rumors!