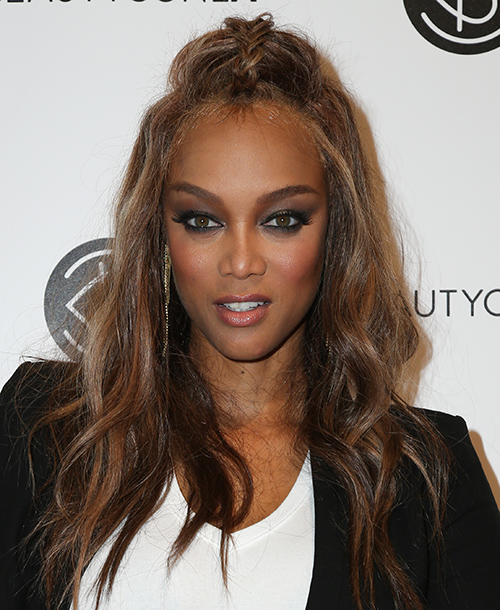 Tyra Banks and Erik Asla have just sold their amazing mansion, so does this mean that there’s trouble in paradise? After dealing with her own personal ups and downs for the last several years, it did seem like Tyra Banks had finally managed to find the happiness in her personal life that she long sought: a dreamy, loving boyfriend, a multi-million dollar home, and the child she’s always dreamed of.

Well, now it looks like her world might come crashing down, as the ‘America’s Next Top Model’ star and her long-term boyfriend, Erik Asla, have sold their $6.5 million dollar Beverly Hills home. The sale comes amid speculation that the couple is going through some serious relationship drama.

Just when the pieces were finally beginning to fit for Tyra Banks, it looks like she is being forced to make some major changes in her life, despite welcoming her first son, York Banks Asla, who was born via a surrogate earlier this year. There are major rumors swirling around that Banks and Asla’s relationship is currently treading on thin ice. One insider tells the New York Post that the pressures of parenthood are putting stress on the couple’s relationship.

In fact, things have been so bad that Norwegian-born Asla has even considered moving into this own apartment after bringing their son home simply because he can’t deal with Banks’ “stress-out” yet “tough TV-persona home.” Surely anyone who has seen a handful of ANTM episodes can easily see that Tyra Banks likes to take control of every opportunity that she sees (even when the situation has nothing to do with her), but could she be projecting some of that controlling behavior on to her partner and their son? Perhaps so, as it seems like Asla is ready to move out as quickly as he can.

TMZ reports that their mansion, which was built in 1926, features four bedrooms, seven bathrooms and over 5,740 square-feet of living space, which is clearly enough room for two parents and a newborn baby. But apparently, not enough for Tyra Banks and her one of her many egos.

To make matters worse, Asla supposedly slashed more than a million dollars from the couple’s asking price before the property was even sold, indicating just how fast he’s looking to make his next step with the former supermodel.

Could this mean that single motherhood is next for Tyra Banks? Given just how fast Erik Asla is willing to put the sale of their mansion behind them, that might be the case as it’s only a matter of time before the couple announce that they’ve split for good. What do you think?