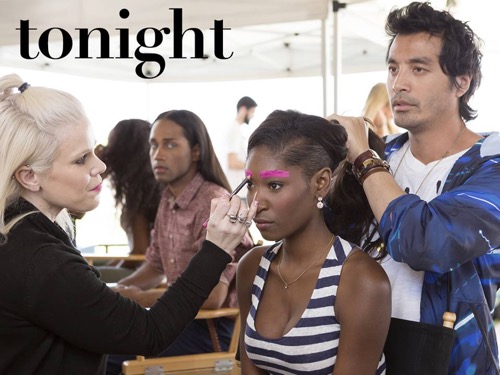 Tonight on CW Tyra Bank’s America’s Next Top Model (ANTM) continues with an all new Friday October 23, cycle 22 episode 11 called, “And Then That Happened” and we have your weekly recap below.  On tonight’s episode behind-the-scenes footage from Cycle 22.

On the last episode the guys and girls shot a music video for Tyra’s new beauty line, where former top model contestant Don Benjamin made an appearance. During a photo shoot where the models had to pose in mid air, tensions ran high as a few of the models had a hard time taking direction. Did you watch the last episode? If you missed it, we have a full and detailed recap right here for you.

On tonight’s episode as per the CW synopsis, “catch up on Cycle 22 with all new footage of behind-the-scenes confessions, flirtations and meltdowns among the guys and girls. Host Tyra Banks joins Miss J, Kelly Cutrone and photo shoot consultant Yu Tsai to monitor all the on-camera drama”

#ANTM tonight is behind the scenes footage that has not been seen before. We see Lacey talking about how she’s never had a BF and is a virgin. Then we see the judges talk about their runway walks. Nyle has taught them some sign language and then we see Ramon his interpreter. Hadassah says she has a baby crush on him because he’s so innocent. Then we see a look back at the first round of cuts in the foam pit. 22 models got to move on and move into the mansion.

Then we see Devin talking about grudges and arguing with others. He says he’s a bit sensitive and Bello is annoyed with his big talk. He thinks he needs to be more humble. Alexa is exhausted and doesn’t like sleeping on the floor or sharing a bathroom. Alexa snapped the next day at a City Walk shoot and said she was ready to go home. Then Mikey says Stefano is his biggest competition and has the best look. Then we see the challenge where they had to walk up high at the shipyard to reveal the 14 finalists.

We see Tyra then showing them walks from the animal kingdom. She shows them a turtle move to help their neck and says the giraffe is good then the owl. Then we see the photo shoot and Devin channeled the giraffe. After the shoot, we see they went to shoot the main titles with Tyra. Nyle talks about the great opportunity to shoot with Tyra. Then we see Delaney to get kicked out for lacking edge. Mame did well and she was grooving on Justin.

Lacey says Mame and Justin are getting closer all the time. Mame says they’re just friends but are getting a little deeper. Nyle and Dustin also start up a bromance. Nyle says Dustin learned to sign and started teaching him to speak. Then we see the game show sequence for Turnt Up Ty-Over. Devin is up first. He decides to keep the envelope. He passed on curls, the mullet, and a clown wig that’s drekitude. Devin is worried about losing his hair and they cut it off.

Lacey got upset about her hair cut and dye. She ended up being happy with it. Stefano went home next and we see the confessional room next. We see Devin talking about how funny he is. Lacey says she knows Devin is always talking about her. Bello then talks about how he’s not going home. Then we see Ava in the bath with Bello joking around. Then we look at Mikey and Ashley and how it almost blew up with Bello when they were fooling around.

Then we see that Mikey picked Devin instead of Ashley for dinner it was D-R-A-M-A. Then the guys came back and Mikey and Devin talked about being over Ava and her pic. It turned unpleasant and Devin turned defensive. Then we see another photo shoot where Dustin goofs around but he couldn’t stop smirking and he was sent home. He’s upset because of all he gave up to come there. Lacey and Nyle won best pic and they get closer.

Lacey says she really likes him and says she’s trying to learn his language. She goes through a roster of signs she’s learned. Then we see Bello being scary in his shoot. Justin talks about Mame and Hadassah always fighting. Ashley and Mame team up against Hadassah as it erupts into a crazy shouting match. He we see Hadassah in the confessional talking about her body is sexier and that’s why everyone hates her because she’s as beautiful as it gets.

We see Judge Lori bad talking Devin then later Ashley is talking about how much she needs this and can’t go home. She’s angry at Devin for possibly costing her a shot to stay. Mame tries to lift Ashley’s spirits. Then Tyra talks about what she teaches them and then we see the slow motion run lesson. Yu Tsai is annoyed with Courtney and Bello then they get better then worse. They run too fast and then fall over each other. Tyra calls up Ashley and Devin and that sends Ashley home.

We get a look at STEM stuff next at the school shoot. We see the shopping spree reward for Hadassah, Mame and Mikey. Mame and Hadassah were even getting along and Tyra is so tired of them saying cute. Then we see the dishwasher loading and kitchen controversy. Mame and Justin are aggravated with the slobs. Then we see smizing at the Doll Shoot. Then we see Nyle complimenting the judges in sign language.

Courtney is asked to name three designers and can’t even name one. Tyra then announces the double elimination and the models wonder who will go home. Then we see the challenge where an eliminated model gets to come back. Mame and Justin are not happy about it. Then we see them running around for their appointments to see who would get jobs. Hadassah won it. Then we see the dog photo shoot. Justin was sent home for his small head. Then we see Dustin get the shot to come back.

Then it’s time for the Vegas trip. We see them packing ridiculous amounts of clothing. The seven models ate at the suite and giggled over the prawns. Hadassah is annoyed that Dustin is back and still not serious. Dustin says he thinks he’s better than her and doesn’t know why she’s still here. Mikey is ready to cut loose his friends to win this thing. Devin is ready for that and says let the games begin and wishes Mikey luck.

Then Mikey tries to get Mame’s attention and tries to teach her how to play pool. Nyle types in a snarky message about the flirt. Next day was the Tyra Beauty challenge with the music video shoot. We see Dustin struggling because he didn’t practice the lyrics he had to lip sync. Tyra boots Dustin for the second time almost as soon as he got back in. Then we see the ones left are Devin, Mame, Mikey, Lacey, Nyle and Hadassah with four episodes left until the finale.