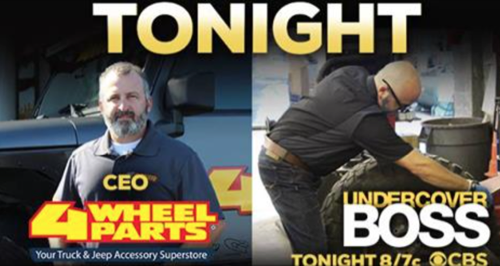 Tonight on CBS their Emmy award winning reality show, Undercover Boss continues for an all new Friday February 5, season 7 Episode 8 called “4 Wheel Parts,” and we have your weekly recap below. On tonight’s episode, Greg Adler, President and CEO of 4 Wheel Parts, the global leader in truck, Jeep, SUV and off-road tires, wheels, lift kits and accessories, goes undercover to meet the employees who keep his company on the right track.

On the last episode, Bryon Stephens, President and COO of Marco’s Pizza, the nation’s fastest-growing pizza franchise with nearly 700 locations in 35 states, went undercover to meet the employees who raked in the “dough” for his company. During Stephens’ journey, he found an employee who was spread too thin and learned that super-sized advertising may be the recipe for success for his brand. Did you watch the last episode? If you missed it, we have a full and detailed recap right here for you.

On tonight’s episode as per the CBS synopsis, “Greg Adler, President and CEO of 4 Wheel Parts, the global leader in truck, Jeep, SUV and off-road tires, wheels, lift kits and accessories, goes undercover to meet the employees who keep his company on the right track. During the boss’s undercover mission, the pressure rises when he is tasked with mounting massive tires on a Jeep.”

CEO Greg Adler is 4 Wheel Parts. The company had originally been opened by his grandfather and eventually his own father had taken over everyday operation but while this family company has had great success stories there had also been a few lean years.

Apparently things had been great after his father had sold the company and Greg decided to stay on as CEO. And in fact, the company had experienced a golden year under Greg direction. But that had been in 2007 and by the next year the economy had tanked. So Greg was forced into making some cuts and that led to great amount of shuffling around. Just to keep the company from going underwater.

Though thankfully things have finally started to turn around since then and Greg has even become optimistic about the future. Which is why he has five year plan for the company. And so the main reason he’s doing this show is because he wants to open up a full thirty more stores in the five years yet first Greg has to know what needs fixing.

So on tonight’s all new episode of “Undercover Boss”, Greg was traveling around the country in order to get the answer to his question. And he was even willing to go in undercover as Rusty the guy auditioning to win a prize money.

And after he realized that, Jeff couldn’t keep it a secret. He warned everybody about “Rusty” and soon Greg began noticing the guys around him acting funny. So Greg had to pull Jeff aside because he knew he had to explain himself.

But after he told Jeff why he was there, he still asked about the department and whether there were any issues. And Jeff had been pretty frank when he said that his guys were stretched thin. They were constantly overworking and their main issue had been the customers’ warranties.

Warranties requires a lot of man power but the guys that are doing jobs aren’t collecting commissions from it. So Greg did see the problem and he left North Carolina promising to come up with a plan. Although lucky for him, his next stop hadn’t been as tricky.

So Greg’s next stop had been at the distribution center in Florida and there he had met Erin. Erin was perfectly nice and she had showed Rusty around even taking care to teach him things he might have a problem with. Yet Greg or “Rusty” had noticed something at the center.

He had seen one of their many black-out where the computers and everything just shuts down. And he found out these black-outs were common occurrences. Erin had told him that when it happens it shows down their workday and so they have to double check everything just to make sure that all the orders are shipped out by six but Greg had been upset by the situation.

He didn’t know if these things were happening at the other distribution center and so he as the boss wanted to fix right away. However, he was forced into ignoring it like everybody else because he couldn’t break his cover for the second time. So he took a note of the situation and was planning on fixing it afterwards.

And on Greg’s next stop, he met a salesperson which had been party of Jeff’s problem. Sales people get a commission on diverting work to the mechanics meanwhile the mechanics weren’t getting as much breaks as the salespeople. Though Greg really came to like Paul.

Paul had it tough growing up but you see that he was doing the best he could. And that he had a great relationship with the customers. Yet Paul had also pointed out something else that was wrong in the company. He had showed that his training had needed to be improved and so Greg knew that the company had to work on property knowledge.

And Kevin had funnily enough gotten some good intel when he was working alongside Michael. Michael had pointed out that training manuals weren’t so good for people who dyslexia like himself. So Greg had later chosen to taken a more hands on approach for those that needed it and he rewarded Michael for his help by setting up a college trust fund in Michael’s son’s name.

And in the end, Jeff had his concerns addressed when Greg decided to up the mechanics’ commission on warranties and Jeff also got a fully paid vacation that he could enjoy with his family. While Erin got help for a down payment on a house and a new computer system was set up for the distribution department. Though Paul was given a new car as well as additional training.