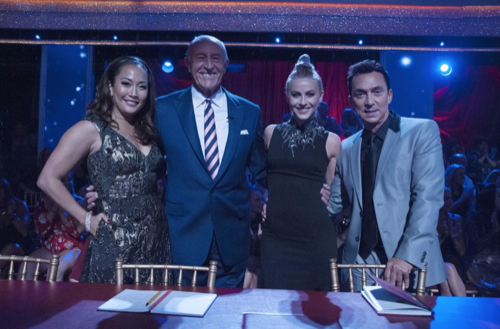 Last night was the first time Dancing with the Stars did a Cirque du Soleil theme. Bruno tells everyone the judges are looking to be transported and mesmerized into the magical world of Cirque du Soleil. It is the dancing that must perform the trick, free your imagination and let the show begin…

Co-host Tom Bergeron announces that tomorrow night will be a double elimination, who you think will go home and who are you desperate to keep on the show? Two couples with the lowest combined judges’ scores and viewers’ votes will be eliminated.

Maureen McCormick and Artem Chigvintsev performed the Argentin Tango to the Cirque du Soleil “Mystere”. Bruno was impressed with Maureen and said she turned into a 1920s Dancing Queen. Carrie Anne said that Maureen was living in another world and made everything revolve around you. Besides needing work on the foot work. Julianne repeats what the other two judges have said. 24/30 [VIDEO HERE]

Jana Kramer and Gleb Savchenko danced the foxtrot to the Cirque du Soleil show, The Beatles “LOVE”. Carrie Anne said she loved the choreography, but Jana keeps slipping up a little bit. Julianne wants them to get out of the middle, and wants Jana to relax a little on the top. Bruno said they did some amazing fluid underarm passes, but keep the tension down after those fluid moves. 23/30 [VIDEO HERE]

Derek Hough and Marilu Henner danced the Pasa Doble to the Cirque du Soleil show “KA”. Julianne was impressed that they used the whole stage, creativity is great, but she worries that Marilu is too much in her head, rather than feeling the dance. Bruno said that even though it was a hard routine, she did pretty good but she needs to “claim” the stage more. Carrie Anne says she is graceful and expressive, but she is forcing the dance next to Derek instead of dancing with him. 21/30 [VIDEO HERE]

Amber Rose and Maksim Chmerkovskiy also dance the Argentin Tango to Cirque du Soleil’s “ZUMANITY”. Julianne and Amber settle up the words Julianne said last week. Bruno said presentation was beautiful. Taste was HOT! Content, plenty of it and he would have plenty more of that dish. Carrie Anne said it was a pleasure to see them do what they do. 24/30

Ryan Lochte and Cheryl burke dance the Viennese Waltz to Cirque du Soleil’s “O”. Carrie Anne says that Ryan has improved tonight and to express himself. Julianne says it was creative and the music was stunning. She agrees with Carrie Anne about the “swimmer back”. Bruno enjoyed it and said that Ryan’s top frame was much better and this was his best performance to date. 22/30

Babyface and Allison Holker dance the tango to Cirque du Soleil’s The Beatles “LOVE”. Julianne encourages Babyface that he can come back next week and fix things. Bruno said it was like watching Poltergeist, but they will be better next week. Carrie Anne says they need to use more energy and harder moves. 18/30

Terra Jole and Sasha Farber perform the Samba inspired by Cirque du Soleil “O”. Bruno tells Terra he lights his fire. Carrie Anne says Terra is in a league of her own. Terra danced beyond her body. She loved it. Julianne tells her she is just so frickin’ sexy, and Terra says Sasha schooled her all week on how to be sexy. Julianne says Terra inspires everyone. 25/30 [VIDEO HERE]

Laurie Hernandez and Valentin Chmerkovskiy dance Jazz to Cirque du Soleil’s show Michael Jackson “ONE”. Carrie Anne says Laurie just killed the Michael Jackson video, and a star is born. Julianne says Michael Jackson may have been the King of Pop, but Laurie is the Queen of the Ballroom. Bruno said it was like watching Debbie Allen, Janet Jackson, Paula Abdul all combined but 100% Laurie. 30/30. The first PERFECT score of the season!! [VIDEO HERE]

Vanilla Ice and Witney Caron are performing the Viennese Waltz to Cirque du Soleil’s show “LA NOUBA”. Julianne said the theme worked in Vanilla’s favor, but she doesn’t like his “pancake” hand. Bruno said somethings were better, but don’t turn into Edward Scissorhands. Carrie Anne says he is bringing a new elegance to his performance and to keep it up. 23/30  [VIDEO HERE]

James Hinchcliffe and Sharna Burgess dance the quickstep to the Cirque du Soleil’s first Broadway show called “PARAMOUR”. Bruno called their performance a Broadway showstopper; even called them Fred and Ginger! Carrie Anne said it was an incredible end to this episode. Julianne and Carrie Anne both noticed a mistake, but she wants to know if he is an Indy Car driver or is he a dancer/actor. He has great charisma too. 28/30 [VIDEO HERE]

Who do you think should be eliminated? Be sure to vote to keep your favorites in, and tune into ABC on Tuesday, October 4th to see Dancing with the Stars: The Results! Check back often for updates, news and spoilers!

So how did our poll do? Well Babyface Edmonds and Vanilla Ice were eliminated on tonights show! Check out the LIVE RECAP HERE!