POLL: Who Will Be Voted Off Dancing With The Stars 2016 Week 6 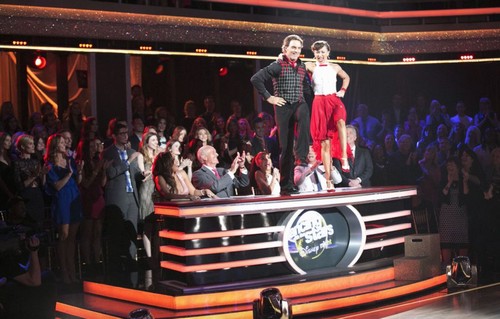 Who will be voted off Dancing With The Stars 2016 Week 6? Last week after the “Switch-Ups” dances, Tom Bergeon announced that there would not be an elimination. So, there are still 9 celebs and their pro partners remaining on the ABC dancing competition.

Who will be eliminated in DWTS Season 22 Week 6? We combined Dancing With The Stars 2016 spoilers and scores, and have broken down our predictions. Don’t forget to vote in our DWTS poll and let us know who you think will be leaving Season 22.

Nyle DiMarco and Peta Murgatroyd: 71
After his DWTS “Swith-Up” performance with Sharna Burgess Nyle DiMarco received the first 10 of the season – although there is some discrepancies thanks to “Paddle Gate.” Regardless of whether or not Nyle did or did not receive a perfect score, the model is not going anywhere any time soon. Even if he was raking in 10’s from the judges, he has a huge fan following. DWTS spoilers tease that for Week 6 Nyle and Peta will be performing the Quickstep to “Hey Pachuco” from “The Mask.”

Ginger Zee and Val Chmerkovskiy: 68
Good Morning America host Ginger Zee is basically guaranteed a few more weeks regardless of how well she dances based on the fact that she has GMA campaigning for her and one of the most popular pro dancers on the show as her partner. Plus, she has been improving week by week to boot. For Famous Dances night, Dancing With The Stars spoilers indicate that Ginger and Val will be dancing Jazz to “Nasty” from the Janet Jackson music video.

Paige VanZant and Mark Ballas: 67
UFC’s Paige VanZant emerged as one of the women to beat in Season 22 rather quickly. Whether or not she has what it takes to go all the way remains unseen, but she definitely will be safe this week (and probably for a few more weeks). Paige has a dance background – and it is definitely paying off the ABC competition. According to DWTS 2016 spoilers, Paige and Mark will be dancing Jazz to “Soul Bossa Nova” from “Austin Powers: International Man of Mystery” on Famous Dances Night.

Wanya Morris and Lindsay Arnold: 65
Boyz II Men alum Wanya Morris has been raking in some decent scores week by week, although he hasn’t been at the top of the leaderboard, he really hasn’t been at the bottom either. After coming in fourth place, that means better than five other dancers, for Switch-Ups he is probably safe for Week 6. Apparently, there are still a lot of diehard Boyz II Men fans out there voting for him every week. Dancing With The Stars 2016 spoilers tease that for Famous Dances Wanya and Lindsay will perform Jazz to “Bye Bye Bye” from NSYNC’s “Video Music Awards” performance.

Von Miller and Witney Carson: 61
NFL pro Von Miller has been neck and neck with Antonio Brown since the Season 22 premiere, and they tied scores last week during Switch-ups. Eventually one of the two of them are going to be voted off. Neither really seems to have what it takes to bring home the Mirror Ball Trophy – but they’ve hung in the competition because there have been dancers worse than them. DWTS spoilers tease that Von Miller and Witney Carson’s Week 6 Famous Dance will be Jazz to“Bad” from Michael Jackson music video.

Antonio Brown and Sharna Burgess: 61
Like fellow NFL star Von Miller, Antonio Brown has been hanging on for the better half of the season, but eventually one of them is going to be voted off. At this point Antonio seems to have a little bit of an edge over Von Miller, so he may be a smidge safer. Regardless, the odds of him going all the way to the Season 22 finale are slim. For Week 6 Antonio Brown and Sharna Burgess will be dancing the Jive to “Footloose” from the movie “Footloose.”

Kim Fields and Sasha Farber: 60
Real Housewives star Kim Fields is a bit of a wild card on Dancing With The Stars. Her judges’ scores have been mediocre, but she obviously has a ton of fans at home voting for her every week. She wasn’t at the bottom of the leaderboard, but pretty close. There is about a 50/50 chance she will be safe through Week 6. DWTS 2016 spoilers indicate that for Famous Dances Kim Fields and Sasha Farber will be dancing the Jive to “You Can’t Stop the Beat” from “Hairspray.”

Jodie Sweetin and Keo Motsepe: 62
Jodie Sweetin did decently during Switch-Ups week when she wasn’t paired up with Keo – their chemistry is a bit lackluster, and it has landed Jodie “in danger” already. Judges’ scores aside, Jodie Sweetin injured her foot during rehearsals and was rushed to the emergency room – there is a chance she won’t even be cleared by the doctor to perform for Week 6, and that would mean an automatic elimination. If Keo Motsepe and Jodie Sweetin do take the dance floor, they will be performing a Contemporary dance to “Try” from P!nk’s music video.

Doug Flutie and Karina Smirnoff: 52
You have to give Doug Flutie props, it really is a miracle he is still on Season 22 – regardless of the fact that he has been at the bottom of the leaderboard every week. Judges’ scores don’t seem to be fazing fans voting at home who clearly have a soft spot for the NFL legend. Spoilers tease that for Week 6 Famous Dances, Doug and his pro partner Karina Smirnoff will be dancing Bollywood to “Jai Ho!” from “Slumdog Millionaire.”

So DWTS fans, who do you think will be voted off Week 6? Will we finally say goodbye to Doug Flutie, or one of the other NFL players? Will Jodie Sweetin and Keo Motsepe dance after her injury?

Let us know what you think in the comments below and don’t forget to check CDL for all of your Dancing With The Stars 2016 spoilers and news.