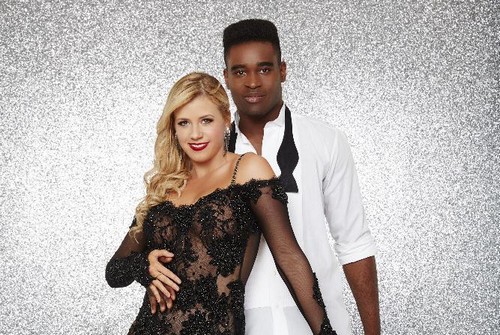 Who will be voted off Dancing With The Stars  Season 22 Week 5? The DWTS 2016 couples wowed fans of the ABC dance competition with their Disney songs – but someone will be sent home this week, whichever couple raked in the lowest combined judges’ scores and votes.

Paige VanZant and Mark Ballas: 36
UFC fighter Paige VanZant has rose to the top of the leaderboard after her performance during Disney Week. She and Mark Ballas have been giving the other DWTS couples some stiff competition during Season 22, and with a score of 36 last week – it looks like Paige won’t be going home any time soon. Spoilers tease that for Week 5 Paige will be paired up with Sasha Farber and they will be dancing the Rumba to “Perfect” by One Direction.

Ginger Zee and Val Chmerkovskiy: 36
Ginger and Val have had solid performances so far in Season 22, last week they tied for first place. Although this is the first time they have been at the top of the leaderboard, they definitely haven’t been at the bottom either. Ginger Zee has been steadily making her way to the front of the pack since the season premiere. With her ties to ABC and co-stars campaigning for votes, Ginger’s safety is a safe bet for now. For Week 5 Ginger will be paired up with Mark Ballas and they will be performing the Salsa to “La Malanga” by Eddie Palmieri.

Antonio Brown and Sharna Burgess: 35
Antonio Brown has a decent fan base, and with his score of 35 last week, he most likely just guaranteed himself another week of safety. The odds of Antonio Brown going all the way in the competition aren’t likely – but he doesn’t seem to be going home anytime soon. Dancing With The Stars spoilers tease that for Switch-Up week Antonio will be paired up with Karina Smirnoff and they will be doing the Cha-Cha-Cha to “Son of a Preacher Man” by Dusty Springfield.

Wanya Morris and Lindsay Arnold: 35
Boyz II Men alum Wanya Morris continued to impress Dancing With The Stars fans last week with her performance of The Lion King. He’s one of those dancers that no one expected to be as good as he turned out to be. Now, some DWTS fans are predicting Wanya Morris could be the next Mirror Ball Trophy Winner. For Switch-Up Week, Wanya will be dancing with Witney Carson, the Tango to “Hold Back the River” by James Bay.

Nyle DiMarco and Peta Murgatroyd: 34
Let’s be honest, Nyle DiMarco isn’t going anywhere anytime soon. For Week 4 Peta and Nile weren’t at the top of the scoreboard, for the first time really all season. But, he is a fan favorite and the judges adore him, plus he has some pretty awesome dance moves to boot. According to Dancing With The Stars spoilers, Nyle will be paired up with Sharna Burgess and they will be dancing the Viennese Waltz to “I Get to Love You” by Ruelle.

Kim Fields and Sasha Farber: 32
Kim Field has been hanging in there week by week. The actress does seem to improving every performance, whether or not she has what it takes to make it to the Dancing With The Stars finals remains unseen. She did score a 32 last week, but Marla Maples shocking elimination was a huge reminder that judges’ scores don’t always guarantee safety – America’s votes count too! For Week 5 Kim Fields will be paired up with Keo Motsepe and spoilers tease that will be dancing the Viennese Waltz to “These Arms of Mine” by Otis Redding.

Von Miller and Witney Carson: 32
NFL pro Von Miller’s performances have been hit and miss. But, as everyone else seems to get higher scores week by week, Von appears to not be improving as quickly as the other celebs. The judges were impressed with his Week 4 performance of Prince Charming, but not as impressed as they were with other duos. For Switch-ups Von Miller will be hitting the DWTS stage with Lindsay Arnold for a Jive to “Hips” by Beans and Fatback.

Doug Flutie and Karina Smirnoff: 24
Former NFL pro Doug Flutie has been hanging on by a thread since Season 22 of Dancing With The Stars began. A lot of fans of the show are honestly shocked that he has made it this far. He obviously has a ton of fans at home voting for him – because he has been scraping at the bottom of the leaderboard for weeks. This could be the week that Doug Flutie is sadly eliminated, you got to admit he sure has heart though. For Switch-Ups, Doug will be performing along side Peta Murgatroyd, spoilers indicate they will be dancing the Tango to “Black and Gold” by Sam Sparro.

Jodie Sweetin and Keo Motsepe: 27
‘Fuller House’ alum Jodie Sweetin started out Season 22 out strong, and a lot of Dancing With The Stars fans thought she would be the one to beat this year – however her performances have been falling short. Last week she was in danger of being voted off, and with a score of 27 it looks like history will be repeating itself. Week 5 spoilers revealed that Jodie will be partnered up with ValCmerkovskiy and they will be dancing the Paso Doble to “Under Control” by Calvin Harris.

So DWTS fans, who do you think will be voted off Week 5 of Season 22? Will it be Jodie Sweetin, Doug Flutie, or someone else? Share your predictions in the comments below and don’t forget to vote in the Dancing With The Stars poll! Be sure to check CDL daily for all of your Dancing With The Stars 2016 spoilers and recaps.