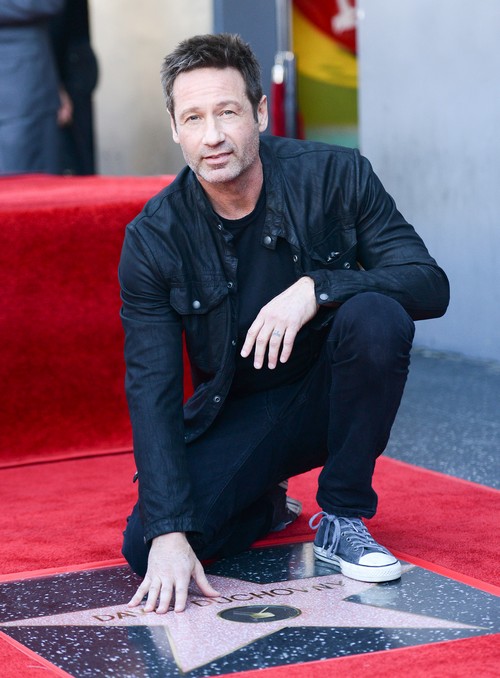 On January 25, David Duchovny received a new honor when he was awarded his Star on the Hollywood Walk of Fame. Prior to the event, Duchovny told Variety, “I think when I see the actual (star) that’ll be something,” he says. “It’s tangible and something that feels like it’ll last a while. That’s something special and something to reflect upon I think.”

It will most definitely last a while! If you’ve never taken a stroll down the Walk of Fame in Hollywood, it’s a must! Is it a touristy thing to do? Of course! But who cares, if you’re ever in Los Angeles, do it!

Sadly, Duchovny’s X-Files co-star, Gillian Anderson was no where to be seen during the event. She simply congratulated him on Twitter saying, “Congrats @davidduchovny! I’ll be right beside you when I die too.” #TheXFiles Gillian never made an appearance to congratulate David in person. What gives?

Could her absence be speaking volumes? Would Gillian Anderson stay away to downplay their romantic relationship? We are all still hooked on believing that Gillian and David really are living a real life romance again… just like they did years ago. But if they really are dead set on keeping their romance under wraps, Gillian staying home during David’s Walk of Fame ceremony makes all kinds of sense.

Both David and Gillian have been very active on their Twitter accounts since the X-Files made it’s big return to the small screen on January 24 and 25 for the two night premiere. One thing is for certain, these two don’t hide their love and appreciation for their fans. What do you fans think? Are Gillian Anderson and David Duchovny working really hard at hiding their romance? Or do you think that the love has already fizzled out and we can only enjoy their on screen chemistry once again? Have you been watching the X-Files new episodes? If you have missed out on any, be sure to check out our recaps here at CDL and keep checking back for all the latest news on David Duchovny and Gillian Anderson! David Duchovny receives a star on the Hollywood Walk of Fame in front of the FOX Theatre in Hollywood, California on January 25, 2016. FameFlynet