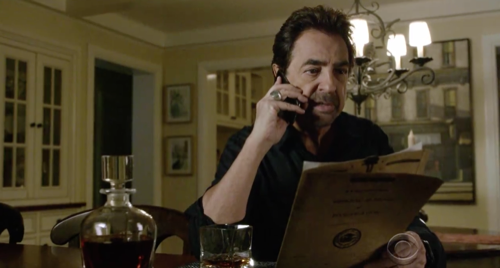 Tonight on CBS their hit drama Criminal Minds returns with an all-new Wednesday, January 4, 2017, episode called “Profiling 202,” and we have your weekly Criminal Minds recap below. On tonight’s Criminal Minds episode season 12 episode 9 as per the CBS synopsis, “Rossi (Joe Mantegna) receives a call on his birthday from serial killer nemesis Tommy Yates (Adam Nelson) who tells him the location of his latest victim.”

Steven Walker had been assigned as the newest agent in the BAU division. He was good at his job, a great profiler, and several agents had already been familiar with him and his capabilities. Prentiss after all had worked with him on an Interpol case and Rossi, had even served as Walker’s mentor back in the day. But Steven knew better than anyone to mention Rossi’s birthday. Rossi’s birthday had been turned into something ugly by known serial killer Tommy Yates. Yates had been imprisoned by Rossi and the two had come to an agreement that Yates would reveal the location of another one of his victims on Rossi’s birthday. So Rossi usually had to spend that time with the serial killer.

However, Yates had been one of the escaped prisoners and that meant he was now free to carry on with his “work” as the Womb Raider. Yates had earned that nickname by killing his female victims and removing their reproductive organs and he had also liked to remove his victims’ vocal cord. So Yates was a dangerous man who had claimed that he had killed over a hundred women yet this year Roman had continued his deal with Rossi. He had called Rossi at home and had given the other man the name of his latest victim. As in the one that he had currently stashed in the car at the time and who he had wanted Rossi to know that he couldn’t save.

So Yates had wanted to taunt Rossi. He had called him before he had killed Jody Wilson and that had at least given Rossi a hint about Yates’s mindset. Yates had decision to suddenly taunt Rossi had told the team that Yates had now needed an audience and that he wasn’t just killing anyone for pleasure anymore. He had wanted others to know about it and therefore he would wait before killing anyone else. Yet, the team had wanted to catch Yates before he could harm more women so they continued to study his changing profile and learning more about Jody had helped with that. Jody hadn’t been chosen at random. She had been a quiet person without much social media profile and so she had been a perfect for a while to Yates.

Yates had formally preferred killing his victims at random, but Jody had been different for him. He had gotten to know her and they had become a serious couple. What with Yates visiting her mother when the elderly women had gotten sick. So that had also gone against Yates’s previous profile because he had been a loner who hadn’t wanted personal contacts and who should have been without any king of emotional entanglement now that he didn’t have a living family member. Though Yates had later Rossi with another victim’s location and name so the second victim had further confused the team. They had known that Yates liked to target women around the same age as he was and he had changed that for Regina Franklin.

Regina Franklin had been twenty-six and a prostitute. So the only reason that Yates had changed his profile for her had been because she was an easy target. Regina had been wondering the streets for her latest client and she had also been a drug addict. But Regina had been killed very sloppily and that had was just another thing that went against Yates’s pattern. So Walker had replayed the last phone call that Yates had made to Rossi and he had picked up on something that everyone missed. He had heard Yates talking about enjoying family while you still have it and Walker had interpreted that Yates hadn’t been making a threat. And that the serial killer had actually been sad when he called Rossi.

However, no one knew what that meant until they looked into Yates’s prison record and tested the blood they had found on Regina. So that’s when they found out that Yates was dying. He apparently had cancer and so that explained the sudden desperation. Yates was killing easier targets because he no longer had the time to be careful about his victims yet the team realized that could be useful for them. They along with the profilers in training that Rossi had added had done their best to get into Yates’s mindset in order to learn how far Yates was willing to go and a third victim getting kidnapped had also helped them because that’s when Rossi fell back into his own pattern.

Rossi had liked to cook to clear his own mind and he always imagined that when he was done that he was dining with the Unsub. So that’s what Rossi did with Yates. He had imagined that Yates was right across from him and that’s when he realized that Yates was killing his latest victims because he had wanted to be remembered. And not just by the media. Yates had wanted to be remembered by Rossi and so Rossi figured out that the third women was going to be killed nearby his own him. Yet, Rossi didn’t come to that conclusion until that last minute and that meant he had to go after Yates alone without any kind of backup.

So Rossi had gone into an unknown situation with a victim and an Unsub, but he eventually chose to disregard the deal that he had with Yates because he wanted to save Brandi and so Rossi had killed Yates despite the many victims that he knew were still out there. Though Rossi knew that he could live with that decision and he tried to tell his students during another lecture that they too would learn how to separate their lives at home from the work they will sometimes have to do. And sure that made one young coordinator figure out that he didn’t want to be in the program anymore only Rossi knew that not everyone was cut out for the job.