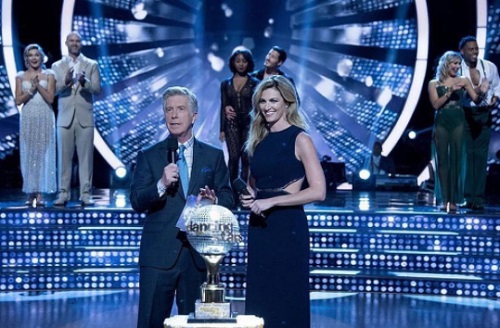 Dancing With the Stars host Erin Andrews is opening up to Health Magazine about her attempts to have a baby. The 39 year old is currently undergoing IVF treatments with eggs that she had frozen a few years ago.

Erin was diagnosed with cervical cancer back in 2016 and initially, her doctor recommended that she have a hysterectomy, which would leave her unable to carry a child. She instead opted to have another surgery to remove a large portion of her cervix to remove the cancer and would allow her to be able to carry a baby. The surgery was successful and now she is speaking out about undergoing IVF treatments with frozen eggs so she and fiancé, Jarret Stoll can have a child together.

Although she has been focused on her career for most of her life, having a child is now what is most important to Erin and Jarret, a professional hockey player that Erin started dating in 2012, and became engaged to in December 2016. 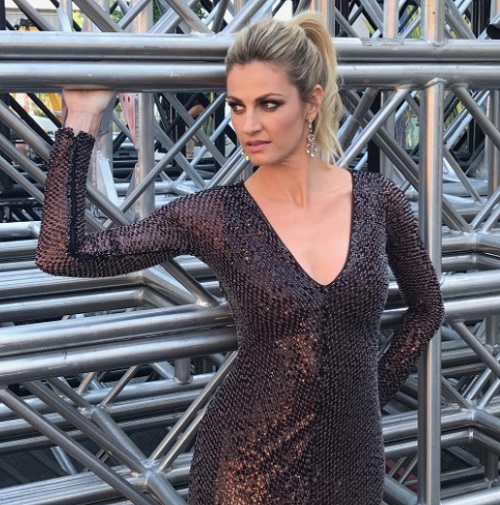 Of the importance of having a family but still continuing with her thriving career, Erin said, “I want to have kids, but I’m not young. I want to continue to do more, but it’s going to be shaped toward how I want to have this family and how I do want to have kids. I think it’s possible that I’ll be able to have a kid and be able to do this for a living. We’re just gonna have to figure out how”. She also says of Jarret that he has been extremely supportive and the cancer diagnosis, as well as her attempts to get pregnant has made them even closer.

Also in the interview, Erin admits that she didn’t tell her co-workers about her cancer diagnosis. As to why she felt she had to keep it a secret, Erin says she was in denial and didn’t want to believe it was a big deal. She also states it was due to the fact that she worked with a bunch of men and also because she had just finished with a very high profile trial and didn’t want people to think she was a woman who was constantly entangled in drama.

The trial Erin was referring to was her lawsuit against her stalker, Michael David Barrett, who filmed the reporter in her hotel rooms through peepholes at a Nashville Marriott and a Radisson airport hotel in Milwaukee, Wisconsin in 2009. She later sued Michael David Barrett, as well as the hotels for negligence and invasion of privacy. She was later awarded $55 million dollars in damages.

Between her cancer diagnosis, IVF treatments, wedding planning, and jobs as a football sidelines reporter, Dancing With the Stars host, as well as a Good Morning America contributor, Erin’s life has no doubt been hectic, but she seems to be doing a good job of balancing things so far.

Check back with CDL for more Erin Andrews news and updates.

Want to make your dorm room comfy, cozy, and cool? Check out my new partnership with @ocmdotcom #Repost @ocmdotcom (@get_repost) ・・・ OCM is proud to announce an exciting new partnership with TV’s Erin Andrews to bring you an exclusive collection of College bedding, décor and more! . . Check out what Erin has to say on our FB page and get a peek at our new line of dorm must-haves! . . About Erin: Erin graduated with a B.A. in Telecommunications and is now FOX Sports’ Lead NFL Sideline Reporter and Co-Host of ABC’s Dancing with the Stars.