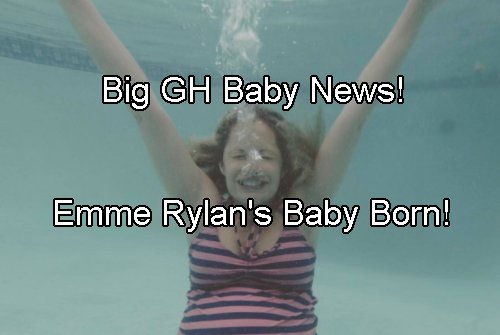 General Hospital spoilers announce that Emme Rylan’s baby watch 2017 kicked into high gear at about 6:30 Eastern time which is 3:30 out in LA. Emme’s partner Don Money shared a pic of his hugely pregnant lady carrying a nursing pillow and in a cute t-shirt at the LA hospital where Emme finally gave birth late this evening. Emme’s little girl is officially here – read on to find out her exciting birth story. Not only does Emme star as Lulu on GH but she formerly play Abby Newman on The Young and the Restless!

Emme has been gearing up for her daughter’s birth by completing her nursery, crafting, making big brother t-shirts for her sons and spending lots of time enjoying their last moments of life as a quad family before adding a fifth to their booming family. It looks like Emme was totally ready but her daughter was slow to show and had to be induced.

Don captioned the first in a series of Instagram pics with “Alright ‘Operation Free Baby Girl Money’ has begun!” Don tagged Emme in the post and hashtagged it “coming soon”. But then hours later, there was still no baby so Don updated anxious GH fans with another IG post of the hospital door behind which the birth awaited!

Then finally, at 9:48 pm Eastern, Don announced that Emme gave birth to their adorable daughter. This time, Don posted a photo of Chuck Norris giving two thumbs up and captioned it “Operation Free Baby Girl Money w/ @emmerylan was a success! Now if I can just find my phone to post a picture…”

#OperationFreeBabyGirlMoney w/ @emmerylan was a success! Now if I can just find my phone to post a picture…

Since Emme went on baby watch, her Instagram feed has been hilarious. She’s shared pics of her baby shower, her with her two sons with partner Don Money and lots of photos of her in the pool because she says that’s the only place she can get comfortable because of her giant baby bump.

Emme’s GH BFF Kirsten Storms (aka Maxie Jones) has been at Emme’s house on “baby watch” while crafting and chilling, but the baby never came! Emme’s doc decided it was time to coax baby girl Money out and scheduled her to be induced on Monday but news was late coming as fans waited to hear more. 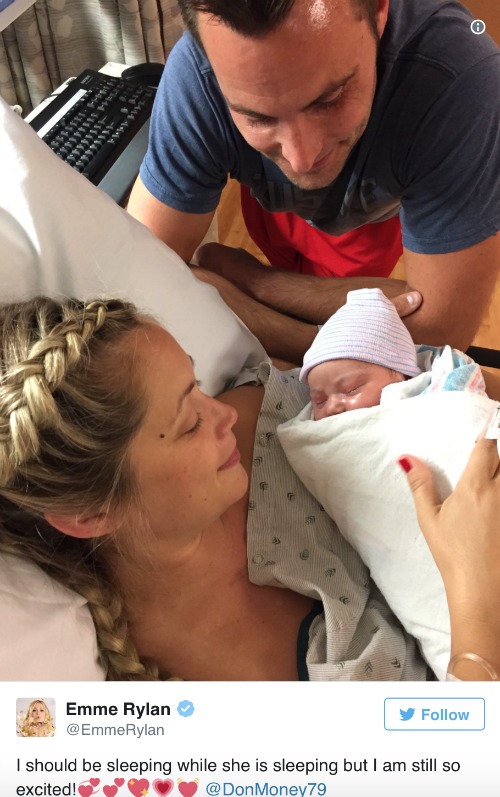 A little after 9:30 pm Eastern on Monday, June 26, Don shared the news although at this time, Emme’s exact delivery time hasn’t been released and other details like weight, length, and her new daughter’s name haven’t been released yet. Check back with CDL for updates as soon as more info comes out!

Share your comments and congratulations below on Emme Rylan giving birth to her new baby girl this evening. This is Emme’s third child. She and Don Money also have sons Jackson and Levi who are seven and five years old and very excited to meet their new baby sister. Check back with CDL often for more General Hospital spoilers, news and updates.

I should be sleeping while she is sleeping but I am still so excited!💞💕💖💗💓 @DonMoney79 pic.twitter.com/bNPBGal5cQ