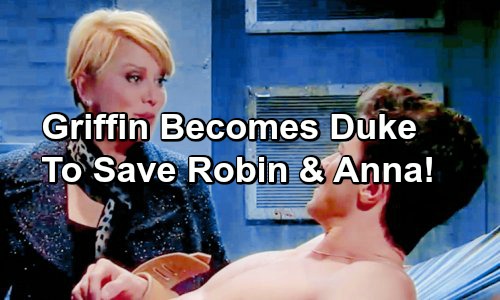 General Hospital spoilers for new GH episodes starting with the Tuesday, March 7 episode reveal that Griffin Munro (Matt Cohen) is in big trouble but the former father will step up in a big way to save those he now considers family including Robin Scorpio (Kimberly McCullough) and Anna Devane (Finola Hughes). Griffin is in the hands of a madwoman this week on General Hospital, but will he survive?

Olivia “Liv” Jerome (Tonja Walker) was so excited to get into Helena Cassadine’s (Constance Towers) secret laboratory down below General Hospital. Liv did her homework, but not thoroughly enough. Helena was only able to bring Stavros Cassadine (Robert Kelker Kelly) back to life because he wasn’t totally dead. 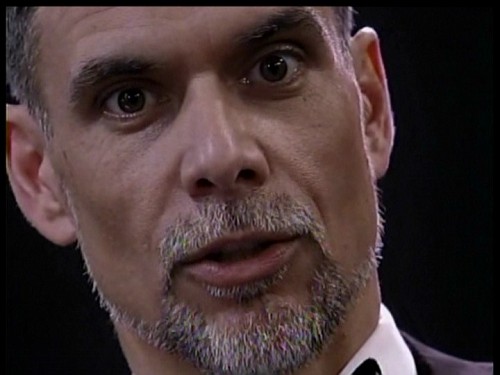 Stavros was more of a Cassadine popsicle than a corpse so, as Robin explained to Liv today, the freezer chamber kept him asleep while he healed. There was no miracle resurrection like Liv was hoping for with Duke Lavery (Ian Buchanan). Liv also needed to remember that Helena had her son’s body. Liv didn’t have Duke’s body, dead or alive. 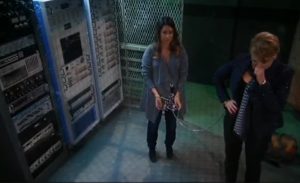 When Duke died, his remains were cremated and Anna spread his ashes back in his motherland of Scotland. What did Liv think she was going to bring back to life? Thin air? Then Liv pulled out that test tube that contained a lock of Duke’s hair. Liv is so crazy she seemed to think she could grow a new Duke out of the DNA in his hair.

But then Robin accidentally knocked the vial to the ground and it shattered and it seems the last of Liv’s sanity shattered with it. After Liv left Robin chained in the basement lair, she was lucky enough to run into Griffin and a devious new plan formed in Liv’s twisted brain. GH spoilers tell us that Liv thinks she can somehow transform Griffin into Duke and have the love of her life back.

When Griffin comes to, he finds himself in a weird lab on Tuesday’s GH new episode with Liv talking crazy about them being together forever. It’s not that Liv thinks Griffin is Duke. But since he’s his son and has his DNA, she thinks she can get Robin to use Helena’s fancy machines to somehow transform Griffin into Duke so they can be together. 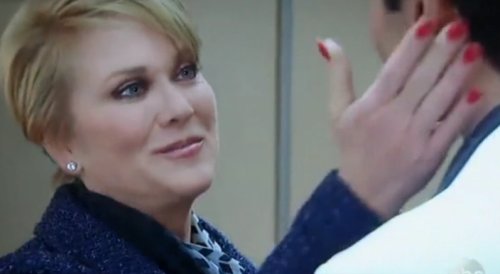 Upcoming General Hospital spoilers photos show Anna with her gun out looking around the basement for Liv. Other spoilers reveal Liv will get the drop on Anna since the British spy is weak from her cancer and cancer treatments. That leaves Anna and Robin both at Liv’s mercy and only Griffin standing between them and certain death.

Griffin can’t let them be harmed. They are the only family he has at this point. Remember when Robin told him last week that they are like siblings? That’s how Griffin feels, too. General Hospital spoilers indicate Griffin is prepared to sacrifice himself to Liv to save Anna and Robin. Griffin promises Liv he’ll be Duke for her if she will let them go. 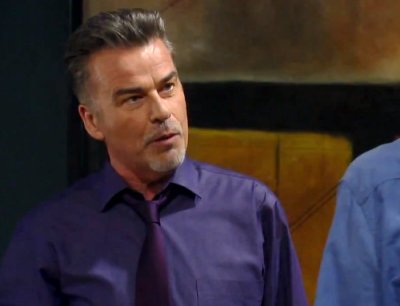 Liv is crazy but she’s not stupid. Will she buy his promises and release Anna and Robin? If not, will Griffin throw himself in front of a bullet to save them? As a former priest, Griffin knows all about sacrifice and wouldn’t hesitate to put himself in the line of fire to save Anna and Robin. Will crazy Liv wound or kill the son of the man she loves because of her insane vendetta?

Share your comments below on Liv’s insanity and Griffin being in danger and tune into CDL often for the latest General Hospital spoilers, news and updates.