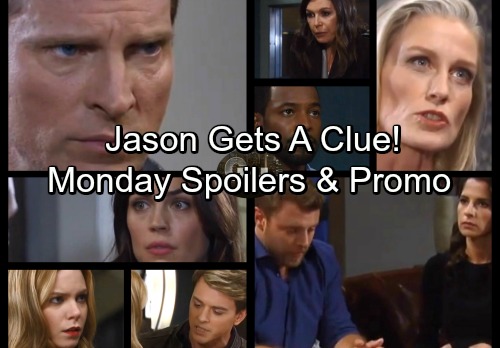 General Hospital (GH) spoilers for Monday, December 11, tease that Drew (Billy Miller) will react to Kim’s (Tamara Braun) bombshell. She just revealed that Oscar (Garren Stitt) is Drew’s son, so the news has obviously thrown him for a loop. Sam (Kelly Monaco) will support Drew as he deals with all this. She’ll make sure he knows that they can handle anything together.

Kim will be patient and understanding as well. She’ll suggest that what happens next is completely up to Drew. It sounds like Drew can be as involved as much or as little as he wants. Kim knows his whole life has been turned upside down, so she hates to make things worse. However, Oscar’s determined to learn the truth and it’s best to get ahead of him on this.

Meanwhile, Josslyn (Eden McCoy) will try to be there for Oscar. He’s having some doubts about his next move, so she’ll want to help if she can. Josslyn will insist that if Oscar doesn’t want to know who his father is, that’s OK. Oscar might push past his hesitation and find out anyway. Then again, he could hold off. Regardless, Kim let this secret out and it won’t be long until Oscar knows his dad’s identity.

At GH, another paternity mystery will play out. Kim confirmed that Nelle’s (Chloe Lanier) pregnant, but that’s not good enough for Michael (Chad Duell). He won’t believe this child’s his until Nelle proves it. Carly (Laura Wright) will agree that solid evidence is needed, so it’s time for the next phase of the baby drama. Michael and Carly will probably have to face the facts later this week.

Other General Hospital spoilers say Anna (Finola Hughes) will have a tense conversation with Andre (Anthony Montgomery). She’ll be disappointed in him for taking such a terrible path. Anna will do her best to find out more information during this chat, so we’ll see how that works out for her.

Across town, Cassandra (Jessica Tuck) will have a proposal for Finn (Michael Easton). She’ll think they might have a way to help each other. Finn will be pleased that Cassandra’s still interested in what he has to offer. He’ll agree to whatever she suggests in hopes of pulling off his own plan.

Elsewhere, Sonny (Maurice Benard) will give Dante (Dominic Zamprogna) updates on the mastermind search. Jason (Steve Burton) will also uncover a clue that could point in the true kidnapper’s direction. He’ll follow the trail and try to bring this baddie down.

It looks like some fun scenes are coming up. We’ll keep you posted as other General Hospital details emerge. Stay tuned to ABC’s GH and don’t forget to check CDL often for the latest General Hospital spoilers, updates and news.