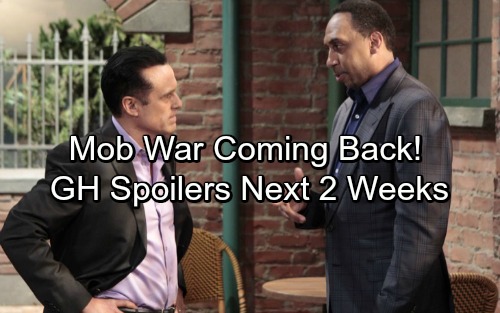 General Hospital (GH) spoilers for the next two weeks tease that some shocking revelations are ahead. The week of September 25-29 will definitely bring some hot drama. For starters, Ava (Maura West) will rat out Patient Six (Steve Burton) at the clinic. She’ll want to protect her spot with these miracle workers, but a proposition could change the game.

Will Ava end up back on Patient Six’s side? Time will tell, but things won’t go well for Jason (Billy Miller) in his new facility. After an alarming episode, Sam will reach out to Monica (Leslie Charleson). She’ll have some concerns about Jason’s care and what his future’s going to look like.

Meanwhile, Michael (Chad Duell) will convince Nelle (Chloe Lanier) to settle down and enjoy his gift. They’ll celebrate the fact that she now owns her apartment, but Carly (Laura Wright) will continue to get in the way. General Hospital spoilers state that a sneak attack will stun Nelle a little later. This could involve Zack’s sister, who recently reached out to Carly.

Michael understands Carly’s doubts about Nelle, but enough is enough. He’ll blow his top over his mom’s latest move. Elsewhere, Nathan (Ryan Paevey) will have a very public showdown with Spinelli (Bradford Anderson). Spin will make a wrong assumption about Amy (Risa Dorken) and Nathan’s secret.

When Nathan tries to explain, he’ll get far too loud. Nathan will blow his own cover, so he’ll have to comfort Amy over his epic fail. The week of October 2-6 will deliver some sweet moments for Amy and Maxie (Kirsten Storms) as well. These two could actually be moving toward a solid friendship.

Other General Hospital spoilers say Ava will reel over her circumstances. Her happiness will be on the line after she makes a big mistake. This undoubtedly involves Patient Six, but just how bad will Ava’s situation get? Ava doesn’t realize it yet, but there could be far more on the line than her beauty. She could be in grave danger.

Thankfully, Griffin (Matt Cohen) could emerge as Ava’s hero. GH spoilers indicate that he’ll make some bold moves to help the woman he cares about. Sonny (Maurice Benard) will also be focused on protecting his loved ones. Brick’s (Stephen A. Smith) new info could force Sonny to make some tough choices – looks like mob violence is fast approaching!

In the meantime, Carly will feel like she owes someone an apology. Will she tell Michael and Nelle she’s sorry for causing so much drama? Carly may take steps toward peace, but don’t expect that to last. Across town, Valentin (James Patrick Stuart) will receive news that turns his world upside down. He’ll do his best to handle it, but a crisis is clearly brewing.

It sounds like Valentin will get in on the Patient Six fiasco. We’ll give you updates as other GH details emerge. Stay tuned to the ABC soap and don’t forget to check CDL often for the latest General Hospital spoilers, updates and news.