General Hospital Spoilers: Shocking Cassadine Returns Back From The Dead – Revenge Plot Against Jason and Valentin 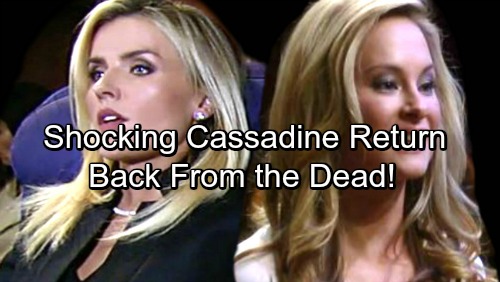 General Hospital (GH) spoilers reveal that although speculation is running rampant that Nikolas Cassadine, last portrayed by Nick Stabile, is about to be resurrected from the dead, this speculation is wrong. GH spoilers are saying two things, that the Cassadine legacy is about to explode and Alexis Davis’ (Nancy Lee Grahn) fear that haunts her – that Cassadines never truly die  – is about to come true once again – only this time it is not who you think!

The Cassadine who is returning from the dead has already been gracing your TV screen as Larissa, but long time fans know her better as Irina Cassadine (then-Alyshia Ochse), Helena’s daughter.

GH’s Irina Cassadine would be the perfect one to come back to life, and what perfect timing! If Larissa truly is Irina, she can exact revenge against Jason Morgan, or the man with his face, “Patient 6” (Steve Burton) for murdering her one friend in Port Charles, Dr. Ewen Keenan (Nathin Butler). Remember back in 2012, when Helena Cassadine (Constance Towers) had the woman in white living at Wyndemere Castle? 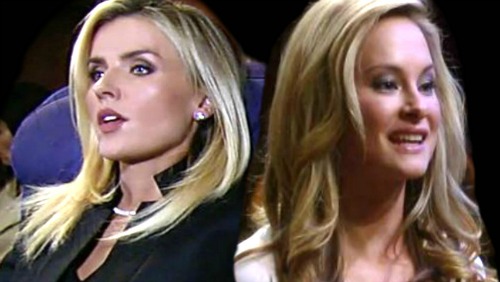 She was called Cassandra then, and Helena used her as an assassin in attempts to kill all the Spencer boys including Ethan Lovett (Nathan Parsons), whom she fell in love with. Although history shows Helena shoots her own daughter, leaving her for dead. Holly Sutton (Emma Samms) arrives to rescue her son, Ethan; there is a possibility that Holly also rescued Irina but kept her from Ethan and Port Charles for her son’s safety and Irina is only emerging now because her mother is dead and there is no longer a threat coming from her and her goons.

The revenge is two-fold for Irina, she has been able to keep Jason from his loved ones and in sedated state while she works on destroying her step-brother, Valentin Cassadine (James Patrick Stuart) – the very man who hired her, having no clue who she really is. Currently in Port Charles, Valentin is doing everything possible to keep his nose clean and erase any of the bad things he has done in order to obtain custody of his daughter, Charlotte (Scarlett Fernandez).

Valentin is completely unaware of the imminent danger, as Irina begins to close in on him, coveting the jewels he has stolen. She isn’t Mikkos’ daughter, so she is not entitled to the Cassadine inheritance but desires the jewels.

General Hospital spoilers tease that it isn’t a coincidence that Dr. Hamilton Finn (Michael Easton) is blackmailed into working with Anna Devane (Finola Hughes), when she shows him a picture of a woman named “Cassandra” – the same name Irina was called when she was the woman in white! How will Finn deal with Cassandra and will his dealings with her bring forth the shocking revelation no one is expecting?