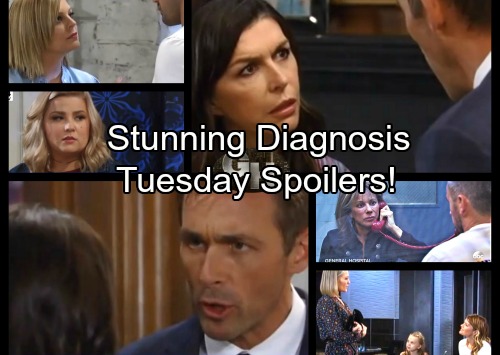 General Hospital (GH) spoilers for Tuesday, November 7, tease that Anna (Finola Hughes) will push Valentin (James Patrick Stuart) to join her team. She’ll reiterate her spy proposition and hope that Valentin gets on board. Unfortunately, Anna will only face rejection.

Valentin will contend that he wants nothing to do with Anna’s investigation. In fact, Valentin will threaten to blow this for Anna if she doesn’t back off. If Anna wants to bring down Cassandra’s (Jessica Tuck) operation, she’ll have to be even sneakier.

Alas, Anna and Finn’s (Michael Easton) plan could get much more complicated on Tuesday. General Hospital spoilers state that Finn will get some disturbing updates from Monica (Leslie Charleson). She’ll explain that someone’s illness may be terminal. Monica will suggest that Finn could be this person’s only hope.

There’s a good chance that Monica and Finn will be discussing Cassandra. Finn assumed this elite criminal was simply a hypochondriac, but it seems she really is quite sick. If anyone can save her, it’s Finn. However, Anna will have to keep a close eye on Finn as he bonds with the enemy. He could become far too sympathetic and that could wreck the whole plan. 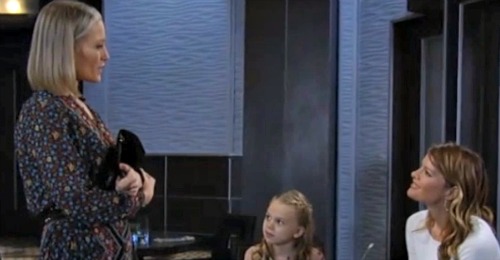 Valentin will certainly do everything in his power to prevent that. He doesn’t want Cassandra getting close to his wife and daughter. Nina and Charlotte are off-limits as far as Valentin is concerned. Of course, Cassandra isn’t exactly someone who likes to follow orders. That’s especially true since she’s got dirt on Valentin. She’s the one in control of this situation.

Across town, Nathan (Ryan Paevey) will stand up to Maxie (Kirsten Storms). He respects his wife’s opinion, but he won’t let Amy (Risa Dorken) get pushed around. General Hospital spoilers say Nathan will get caught in the middle of some conflict. He’ll make sure Amy knows her brother is the priority.

Chet’s (Chris Van Etten) health is heading downhill, so Amy will need plenty of reassurance. Maxie’s big story may be put on hold briefly. In prison, Alexis (Nancy Lee Grahn) will try to get to the bottom of Julian’s (William deVry) dilemma. She’ll wonder who’s been attacking him and why.

Julian may not be willing to drag Alexis into all this, but she’ll refuse to let it go. Since Julian’s life is at stake, Alexis will feel the need to help him out. We’ll keep you posted as other GH news comes in. Stick with the ABC soap and don’t forget to check CDL often for the latest General Hospital spoilers, updates and news.