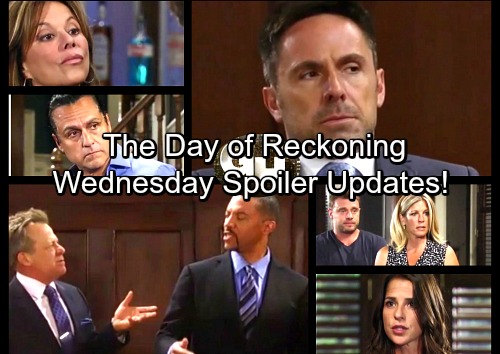 General Hospital (GH) spoilers for Wednesday, August 23, tease that Scott (Kin Shriner) will brace for a difficult setback. In the courtroom, Rudge (David Lee) will emerge as the prosecution’s next witness. He’ll be called upon to clear up the defendant’s motives, which obviously means bad news for Julian. Rudge isn’t going to be kind when he gives his testimony.

Scott will undoubtedly object every step of the way, but the judge will overrule him just as quickly. Even Julian will leap to his feet and accuse Rudge of lying, but making a scene isn’t going to do him any favors. General Hospital spoilers say Scott and Julian are fighting a battle that they simply can’t win.

In his studio, Franco (Roger Howarth) will explain some of his artwork to Liz (Rebecca Herbst) and she’ll admire his skills. Liz will remind Franco that there’s a reason for his fame. Franco will appreciate Liz’s compliments, but he’ll feel like he’s famous for the wrong reasons. He’s having trouble shaking off his past, but better days are ahead. Franco just has some issues to work through first.

Other GH spoilers say Alexis (Nancy Lee Grahn) will mull over Ned’s (Wally Kurth) request. He’ll note that he’s in the market for her legal services. Alexis will look intrigued, but she won’t be sure she’s on board for Ned’s mess. Maybe his ELQ plan will be a bit complicated, especially since they don’t know how Michael (Chad Duell) will react.

Still, Ned can be awfully persuasive. He may win Alexis over sooner or later. Whatever the case, Ned will indeed approach Michael with a proposal later this week. A deal will be made, but where will this storyline go from there? Will there be consequences for Michael, Ned or even both? GH must have some twists and turns in store.

Across town, Sam (Kelly Monaco) will put a stop to all the lies. She blurted out that she shot Sonny (Maurice Benard) and now she intends to explain. Carly (Laura Wright) won’t understand what’s going on and why Sonny has kept her out of the loop. She’ll urge Sam, Sonny and Jason (Billy Miller) to come clean before she really blows her top.

Unfortunately, their explanations won’t be enough to settle Carly down. General Hospital spoilers state that Carly’s rage will build as she considers all the deception. She’ll be especially disappointed in Sonny for abusing her trust.

They were finally on good terms again, but this is a major blow to their relationship. Sonny will have to show Carly that he can be honest, even when the circumstances aren’t ideal. Jason and Sam will certainly face some struggles, too. We’ll give you updates as other details emerge. Stay tuned to the ABC soap and don’t forget to check CDL often for the latest General Hospital spoilers, updates and news.