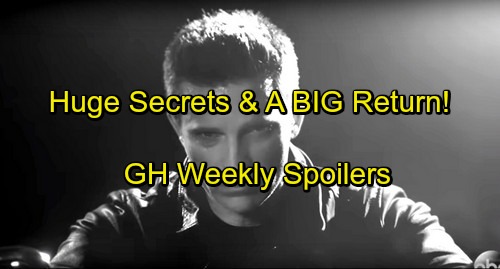 General Hospital (GH) spoilers for the week of September 18-22 tease that some shockers are in store. First, there’s the return everyone’s been buzzing about. Steve Burton (ex-Jason) will make his big comeback on September 19. GH fans won’t want to miss Burton’s new scenes.

Meanwhile, Franco (Roger Howarth) will face a distraction from Scott (Kin Shriner). As Franco works on solving his childhood mystery, Scott will grow increasingly uncomfortable. He’ll do whatever he can to keep Franco’s mind on safer topics.

Unfortunately, Scott’s efforts won’t work for long. Franco just can’t rest until he knows the truth. However, Franco will at least put his mission on hold to help Liz (Rebecca Herbst). General Hospital spoilers say a nasty run-in with someone will leave Liz upset.

Perhaps Sam (Kelly Monaco) will lash out for the umpteenth time. Jason’s (Billy Miller) latest ordeal has really been tough for Sam to handle. Franco will face his own issues when some deception is revealed. This could have something to do with Jason and the reason he was in the photograph.

Franco will be outraged, but Liz will manage to calm him down. They’ll reaffirm their commitment to each other as they prepare for more trouble. Elsewhere, Lulu (Emme Rylan) will find out the details of Ava (Maura West) and Valentin’s (James Patrick Stuart) deal. You’d think she’d be angry, but she’ll actually begin to see another side of Valentin.

GH spoilers indicate that Lulu and Valentin will make an unexpected connection. This could be great news for Charlotte (Scarlett Fernandez). She’d certainly love to see her parents get along. Across town, Michael (Chad Duell) will make a move that stuns Nelle (Chloe Lanier). Will this be a good surprise or a bad one? Since they just made love declarations, maybe Michael has something sweet in store.

Other General Hospital spoilers state that Kristina (Lexi Ainsworth) will make a confession. It sounds like she’ll fill Parker (Ashley Jones) in on her ruse with Valerie (Brytni Sarpy). Once Kristina admits she wanted to make Parker jealous, it could spark some changes between them.

At GH, Sam will realize her life isn’t going back to normal anytime soon. She’ll be forced to make a difficult choice regarding Jason’s care. General Hospital spoilers say Jason will be sent to an institution, so Sam will obviously be a mess. Alexis (Nancy Lee Grahn) will be by Sam’s side as she copes with the pain.

Finally, Carly (Laura Wright) and Sonny (Maurice Benard) will put their heads together to figure something out. Will this relate to Oscar’s (Garren Stitt) background? Some revelations about the teen should be coming in the near future. We’ll give you updates as other GH info comes in. Stay tuned to the ABC soap and don’t forget to check CDL often for the latest General Hospital spoilers, updates and news.